NEWARK -- Mika Zibanejad scored the game-winning goal with left in overtime to power the Rangers to a 4-3 win over the Devils on Saturday at the Prudential Center. He scored through the legs of Devils goalie Cory Schneider after Rangers goalie Antti Raanta... 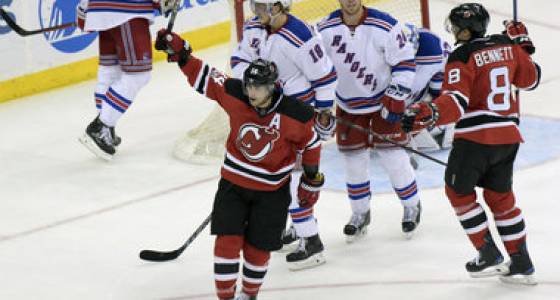 NEWARK -- Mika Zibanejad scored the game-winning goal with left in overtime to power the Rangers to a 4-3 win over the Devils on Saturday at the Prudential Center.

He scored through the legs of Devils goalie Cory Schneider after Rangers goalie Antti Raanta denied a breakaway from Devils forward Kyle Palmieri.

The game went to overtime following a wild third period where the Devils surged to a lead before the Rangers tied it.

The Devils turned a one-goal deficit into a one-goal lead in the first 74 seconds of the third period when Palmieri scored twice. First he fired a shot from the left circle that hit the glove of Rangers goalie Antti Raanta before bouncing across the line 27 seconds into play in the final period.

The Devils then went on a power play at 1:10, where they scored in four seconds off an Andy Greene slap shot that deflected off Palmieri.

The Rangers tied the game with 4:25 left in regulation when defenseman Adam Clendening one-timed a shot from the right point past Devils goalie Cory Schneider.

The sudden burst of offense helped the Devils erase an early deficit.

Despite the Devils recording seven of the first eight shots of the game and sustaining early pressure, the Rangers broke through first on their second shot. Defenseman Dan Girardi sent a shot from the blue line through traffic, where it deflected twice before popping over Devils goalie Cory Schneider.

Rangers forward Chris Kreider was credited with the goal off a deflection at 6:40 in the first period.

The Rangers doubled the lead later in the first period when forward Jesper Fast used a shot fake to set up a cross-ice pass to Oscar Lindberg in the left circle, and he scored into an open net before Schneider could slide over at 17:32. The Devils trailed 2-0 despite outshooting the Rangers, 15-10 in the first period.

The shot advantage went to the Rangers in the second period, when the visitors racked up 17 shots to the Devils' 11. But it was the Devils who tallied the only goal of the frame to pull within 2-1.

Adam Henrique took a pass behind the net before sliding a wrap-around shot through the legs of Rangers goalie Antti Raanta at 18:28 for his 16th goal of the season.

Helgeson clears waivers: Defenseman Seth Helgeson cleared waivers at noon on Saturday, and the Devils can now send him to Albany (AHL). But for now, Helgeson with remain with the NHL team.

Injuries: Forward Pavel Zacha continued with off-ice workouts after suffering a concussion in Tuesday's 3-2 loss to the Ottawa Senators. He is considered doubtful for Monday's game against the Montreal Canadiens.

Next up: The Devils conclude their February schedule and play their final game before the trade deadline when they host the Canadiens at 7 p.m. on Monday at the Prudential Center.