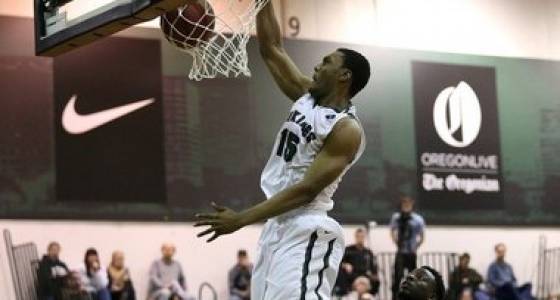 Parsons was 6 of 14 from the floor and had a game-high seven rebounds. Robinson made three 3-pointers and Traylin Farris added 14 points for the Vikings.

The game was tied at 29 with six minutes left in the first half before Portland State closed on a 17-5 run for a 46-34 halftime advantage. The surge continued with a 25-13 run to open the second half and the Vikings had a 71-47 lead with 10 minutes to play.

PORTLAND, Ore. -- A familiar recipe that included balanced offense, and a pressure-packed, turnover-forcing defense led the Portland State Vikings to an 84-72 victory over Northern Arizona in the final men's basketball game in the Stott Center gymnasium.

The Vikings had four players score in double figures, led by 16 points each from De'Sean Parsons and Calaen Robinson. But it was the defense that was the real story. PSU's press created 15 steals and forced 23 NAU turnovers that the Vikings turned into 34 points.

It was also the end of an era for the Portland State men's basketball program as it was playing its final game in the Stott Center gymnasium (PSU's women have two more games next week). PSU first played basketball in the current building in 1966-67 - and members of that team were in attendance on Saturday night. On-going construction of the new Viking Pavilion will soon take over the main gym area. PSU will play off campus at a site to be determined in 2017-18, then return to the new Viking Pavilion for the 2018-19 season.

The Lumberjacks looked good early on, making 10 of their first 11 shots and leading 24-13 after eight minutes. At that point, the Vikings' full-court pressure created a frenetic pace. PSU mounted a blistering 27-6 run over the next nine minutes. It was capped by three straight three-point field goals by Bryce Canda and PSU led 40-30.

By halftime the press had made a big impact with the Vikings forcing 11 Lumberjack turnovers, including eight steals, for 19 points. After the hot start, NAU made only 3-17 shots the rest of the half. Portland State led 46-34 at the break.

Portland State continued the pressure into the second half and soon led by more than 20 points. PSU was up 65-41 at the 14:08 mark and the largest lead was 75-49 with 7:06 to go. NAU tacked on some late points to make the score respectable, but this was the Vikings' night.

JoJo Anderson and Jordyn Martin each scored 13 points to lead NAU. The Lumberjacks fell to 8-21 on the season, 5-11 in the Big Sky.

GAME NOTES: Zach Gengler had four steals on the night and has a career-high 47 on the season. Robinson has a Big Sky-leading 66 steals this season... Portland State ends its home schedule with a 10-3 record... NAU beat the Vikings on Jan. 16 in Flagstaff, 83-76... Portland State goes on the road next week, playing at Northern Colorado on Thursday, then North Dakota on Saturday. Live video and audio can be found at GoViks.com and live stats will be available at ViksLive.com. The Big Sky Conference Tournament begins on Mar. 7 in Reno.