Derrick Rose wants to be a Knick for a long time: agent

B.J. Armstrong, the former Chicago Bull and Derrick Rose’s agent, still feels this Knicks group has a good future together despite their record, and he hopes his client is part of it.Two days after Rose was spared at the trading deadline, Armstrong told... 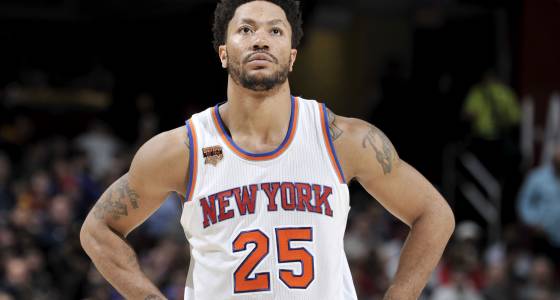 B.J. Armstrong, the former Chicago Bull and Derrick Rose’s agent, still feels this Knicks group has a good future together despite their record, and he hopes his client is part of it.

Two days after Rose was spared at the trading deadline, Armstrong told The Post the Knicks aren’t as far away as some believe.

Rose is a free agent July 1, but is eligible for a contract extension at any juncture from now until then. Considering the Knicks’ record is 12 games below .500, there are indications Phil Jackson will look for a new point guard, either in the draft or free agency.

“Nothing has changed with us,’’ Armstrong said in a phone interview. “It’s the same. We are committed to New York long term. We’ve been committed from the first day we got traded there. You win together, lose together and stick together.”

Sources told The Post the Knicks talked to the Timberwolves in the days leading to the trade deadline about a swap for point guard Ricky Rubio. Nothing materialized amid varying reports on how close a deal got.

Armstrong wonders if the Minnesota talks were as serious as advertised, saying he didn’t hear anything from Wolves coach and president Tom Thibodeau or Phil Jackson, whom he played for with the Bulls.

“I’ve known Thibodeau and Phil for 25 years, I would’ve at least gotten a call from either one of those guys if it were that close,’’ said Armstrong, a former Bulls front-office decision-maker. “I deal with the facts, not rumors. I don’t know how close they were.’’

Armstrong said there are no hard feelings, despite the reports.

“This organization is here to win basketball games,’’ Armstrong said. “Bottom line, if they’re 12 games over .500, no one’s having that conversation.’’

Instead, the Knicks entered Saturday’s Garden match against the Sixers 12 games below .500 (23-35) — with the same number of losses as rebuilding Philly.

The Knicks still are considered on the outside fringe of a playoff race – five games out of the eighth seed with 24 to play.

“They’re still figuring out each other,’’ Armstrong said. “New system. New coach. I tell Derrick don’t get frustrated, stick with the system and players and keep encouraging guys and try to find a way to win games. That’s what being a good teammate is all about.’’

Indeed, Rose has seemed frustrated with the triangle sets, calling the system on the day of the deadline “random basketball’’ and feeling the point guard is stuck in the corner too often.

Derrick Rose cracking jokes as Knicks ship sinks 0:0 Derrick Rose definitely is not going to Minnesota, but he...

It’s been a quirky season for Rose, whose campaign hit rock bottom when he went AWOL in January, missing the New Orleans game without permission.

That’s why Rose’s remark Friday that he had to catch a flight to Chicago caused a stir. A Knicks official said he was jesting. A source said Rose attended the morning shootaround Saturday. Armstrong said if he did go to Chicago, it would be news to him.

Armstrong said his 13 years as an NBA player and stint in the front office allow him a perspective on the team — that having 10 new guys on the roster takes longer to jell than most would think. And Armstrong pointed to the fact the Knicks have lost eight games on the final possession since mid-December as an indicator of their potential.

“They have individual talent, but it takes time to build chemistry with one another and beat good teams,’’ Armstrong said. “They’ve lost some very close games. They’re still learning spacing, how to communicate. In this NBA, it takes time to win. It’s not a league you just put it together.

“They’re much closer than people think – one, two possessions from being exactly where they want to be if they continue to stick together,’’ Armstrong added. “Yeah, I wish [Kristaps Porzingis] was in Year 7 or 8, but he’s in Year 2.’’

Derrick Rose grumbles about Knicks offense 0:0 CLEVELAND — If these were his final hours as a...

Rose and Porzingis haven’t meshed. The Knicks starting point guard has lamented the lack of pick-and-rolls. On Friday, Rose and Jeff Hornacek huddled for 10 minutes after Rose had met with GM Steve Mills.

“Every GM in league sees if there’s something that may make the team better,’’ Hornacek said. “Most of the time nothing happens because the players you have you find out are better than the players you can get. With Derrick, we were just talking about running the offense and put him in more pick-and-roll situations.”

“[The triangle] is not random basketball,’’ the coach said. “It’s more reads. You’re not calling a play. That takes time. We’d all like to say you can do it right away. With Derrick, if he sets a screen and makes a cut, you have to be ready. His cut is explosive. He gets there fast. You have to be ready to throw it ahead. We’re not great at it.”

As far as getting Rose into more pick-and-rolls, Hornacek said: “He’s got the ball in early transition, he can make the call. There’s eight calls you can make. Five can lead to a high pick-and-roll.’’