Derek Stepan is not expected to lead the Rangers in goals, but it seems every season, there comes a lull like this one that keeps him from being the undisputed top-line center every team in the NHL so desperately needs.And that fact helps to continually keep... 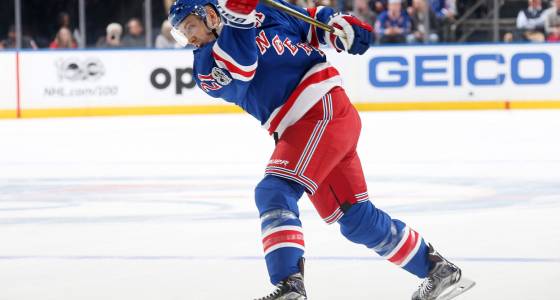 Derek Stepan is not expected to lead the Rangers in goals, but it seems every season, there comes a lull like this one that keeps him from being the undisputed top-line center every team in the NHL so desperately needs.

And that fact helps to continually keep the Rangers as an interested party at this time of year, with the trade deadline looming at 3 p.m. on Wednesday. Any chance to add top-six talent has to be taken into serious consideration.

Sunday’s sloppy and tired 5-2 loss to the Blue Jackets at the Garden was game No. 16 for Stepan without a goal. He has just 12 goals through 62 games. He never has scored more than the 22 goals he tallied this past season, though the 18 in the lockout-shortened 48-game season of 2012-13 represented a more prolific pace.

But the Blueshirts need more offensive production, in the most basic of terms, out of Stepan — and he knows that.

“It’s been a struggle,” Stepan told The Post on Sunday night, his team getting Monday off before playing host to the league-leading Capitals on Tuesday night at the Garden.

“I think obviously I’m doing a lot of good things and I’ve gotten the opportunities, but I just can’t find the back of the net. I think it’s 16 games where I haven’t been able to find it. It’s certainly something that I want to do. I want to score. I’m trying real hard, but sometimes you start gripping the stick harder and start overthinking things.”

Stepan didn’t have quite this bad a drought last season, but did have a midseason 14-game stretch with just one goal. In 2014-15, he had just three goals in his first 20 games (after he broke his leg while doing on-ice testing in training camp).

Before that season, while coming off a run to the Stanley Cup final, the 26-year-old from Hastings, Minn., signed a six-year, $39 million contract, carrying an annual salary-cap hit of $6.5 million. With it came expectations for production that haven’t always been met.

Though Stepan’s game isn’t properly evaluated solely by the scoresheet, he still needs to put up some numbers to justify his number on the team’s financial budget.

“I’m just going to keep focusing on doing the right thing and playing the right way,” Stepan said, “and hopefully the guys take care of me and allow me to get a funky one.”

Over the past month, the Rangers have thrived even without Stepan putting up stats. They were 9-1-1 in their previous 11 going into Sunday night, a run that got them well clear of the second wild card. They now are battling with Columbus for the unenviable position of third place in the Metropolitan Division. The winner earns the right to get jammed on the side of the bracket with the two powerhouses of the conference (if not the league) in the Capitals and Penguins. The loser, settling for the first wild card, will get a relatively soft landing against the wide-open Atlantic Division.

During this good run, Stepan has played on a line with Rick Nash on the right and mostly with Jimmy Vesey on the left. Coach Alain Vigneault blew up the line in the second period on Sunday in hopes of sparking something, swapping Vesey with Michael Grabner.

It hardly worked, and the Blueshirts made mental mistakes all over the ice while playing their fifth game in eight days.

“Step’s a hard worker,” Vigneault said. “Execution-wise, [Sunday] night, he was like the rest of our group: a little bit off.”

Vigneault can mix and match all he wants, but there is no hiding that he needs Stepan to produce. Though the trade deadline might alter the constitution of the Rangers roster, their reliance on Stepan hardly will diminish.

“I’ve been playing the right way, defensively, setting up guys that I play with,” Stepan said. “That’s important, too. But it’s important to contribute offensively, too, scoring some goals. Certainly had my looks, and have to make sure I bear down on the next one, try not to overthink it. It kind of can creep in, but I know it’s important to me that I find a way to break through here.”