Famagusta 14°
overcast clouds
BUSINESS EDUCATION ENTERTAINMENT HEALTH POLITICS SCIENCE SPORTS TECHNOLOGY
10:22 Four Benefits of Hiring a Dedicated Development Team
04:48 Mark Kelly, President of Safety Marking Inc., Discusses Structuring Effective...
17:58 Trump wants to play golf at the Biden swearing-in in Scotland - but is...
17:54 First doubts Regarding tightened Steps: two National Countries Extract...
10:39 Covid-19 : in France, the end of containment and entry into force of the...
04:34 The schools of Rome will use the Internet with light bulbs: what it is...
10:58 Kratom Tea: How Is It?
11:46 Office Furniture Products for you!
12:17 Top Clubs, Their Value, Revenue And Current Standings
11:14 Reasons Why Rewarding Yourself is a Good Practice
BIST
1529
GOLD
440.619
USD
7.4047
GPB
10.0970
EUR
9.0154
Breaking News
Which Cake Flavours Do Americans Like Most?
Close

BIRMINGHAM, Ala. >> Deontay Wilder proved his surgically repaired right hand is still a devastating force — once he unleashed it.Wilder returned from right arm injuries to stop Gerald Washington in the fifth round and retain his WBC heavyweight... 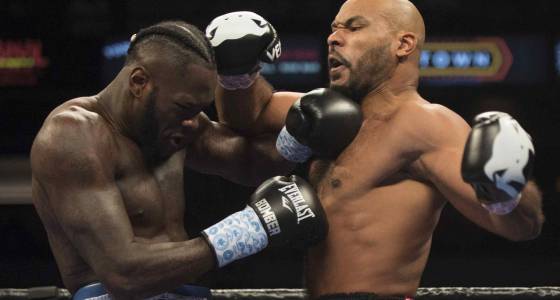 BIRMINGHAM, Ala. >> Deontay Wilder proved his surgically repaired right hand is still a devastating force — once he unleashed it.

Wilder returned from right arm injuries to stop Gerald Washington in the fifth round and retain his WBC heavyweight title Saturday night in a fight that heated up quickly after a quiet start.

Wilder (38-0, 37 knockouts) seemed mostly cautious with his right in the early rounds but staggered Washington (18-1-1) and sent him down with a hard one followed by a left in the fifth at Legacy Arena. He came right back at the former USC football player and Navy mechanic, pummeling him against the ropes with both hands.

Referee Mike Griffin stopped the fight at 1:45 of the fifth after Wilder punctuated his barrage with a left uppercut. An unsteady Washington wobbled against the ropes on the opposite side after the stoppage.

It was the Tuscaloosa, Alabama, native’s fifth title defense but Washington held his own before getting caught by the big shots. Two judges had the challenger from California ahead going into the fifth.

“I just got a little impatient,” Washington said. “I was trying to go for it. It was an even boxing match. I could have kept it like that and kept it boring. I don’t know why I fell asleep there. I guess I lost a little focus.

“I caught him with one shot when he was coming in. But instead of me keeping that play going and keep pushing him back and keep him in control by keeping him in the center of the ring, I tried to get on him. I was trying to play a little counter punch role and catch him coming in. He just caught me.”

Wilder’s left eye was marked up by the third round but neither fighter landed many hard shots in the first four rounds. Wilder landed 33 of 113 punches, or 29.2 percent.

“I thought he was in control,” Washington’s trainer John Pullman said. “He just lost focus for a split second. Against a devastating puncher like Deontay Wilder, you can’t do that.”

Last year, Wilder, 31, broke his right hand and tore his right biceps in a knockout win over Chris Arreola, a replacement after Alexander Povetkin’s disqualification for testing positive for meldonium. Wilder spent part of his training camp in a New York courtroom, where he won a unanimous decision in seeking the $5 million payday from the Povetkin fight.

Washington replaced Polish challenger Andrzej Wawrzyk in easily the biggest fight of the 34-year-old’s career. Wawrzyk had become the second scheduled Wilder opponent in the last year to test positive for a banned substance.

He is hoping to face WBO champion Joseph Parker this summer with the big prize potentially being the Wladimir Klitscho-Anthony Joshua winner.

In the undercard, Jarrett Hurd knocked out Tony Harrison in the ninth round Saturday night to win the vacant IBF junior middleweight title.

The title was vacated with Jermall Charlo’s move to middleweight. Harrison got up in time to continue but the referee stopped it after he spit out his mouthpiece.

Heavyweight Dominic Breazeale (18-1, 16 KOs) knocked previously unbeaten Izuagbe Ugohono (17-1) through the ropes and out at 50 seconds in the fifth round. It was the third knockdown of Ugohono, who had sent Breazeale down with four straight rights late in the fourth.