Even Denzel Valentine had to laugh at his forced "heat check" 3-point try in Friday's overtime victory over the Suns, as much for how woefully short it fell as for the memory it recalled."(Michigan State) coach (Tom) Izzo always used to get... 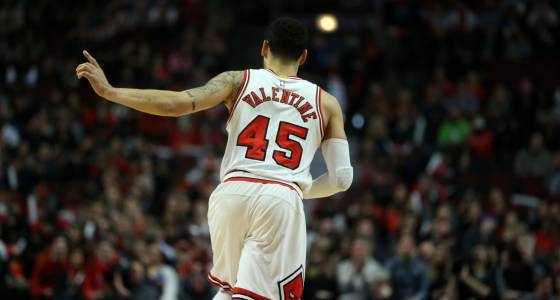 Even Denzel Valentine had to laugh at his forced "heat check" 3-point try in Friday's overtime victory over the Suns, as much for how woefully short it fell as for the memory it recalled.

"(Michigan State) coach (Tom) Izzo always used to get on me all the time about taking those shots," Valentine said. "As soon as I got hot at Michigan State, he would call me to the side, 'All right, this is when you go crazy now.' I just have to replay that back in my head when I get hot. Still take good shots, play within yourself."

Save for the Jan. 10 road loss to the Wizards in which he sank five 3-pointers, about the only heat checking Valentine had been doing this season came during Chicago's recent spell of warm weather.

Valentine and Nikola Mirotic look like different players in the two games since Thursday's trade of Taj Gibson and Doug McDermott to the Thunder created rotation spots for them. But neither player is taking his latest opportunity for granted.

"I've got to keep working. If I go out and play badly, I could be right back out of the rotation," Valentine said. "That's how I'm approaching it."

Added Mirotic: "I know I need to be a better player."

"Denzel doesn't play with any fear," coach Fred Hoiberg said. "And now that the deadline is over and Niko knows where he is, he seems so much more relaxed."

Mirotic admitted the difficulty in hearing his name in trade rumors for the first time, calling it "stressful" and "another experience in my life." The third-year forward has had a different on-court demeanor since the deadline passed.

Photos of the Bulls' Nikola Mirotic.

"I'm excited," he said. "I'm going to be a Bull, first of all. It's another chance. It is a little bit easier. The deadline is over and I'm back in the rotation. It's another great opportunity. I'm focused on the small details, especially defensively. And offensively, I'm trying to play simple. I'm playing a little more relaxed and with more confidence. I'm making shots."

Valentine talked about the ability to "play through some things" now that his minutes will be more consistent. It's hard to perform when you're looking over your shoulder.

It's also hard to perform when you're hurt. Valentine revealed how much the two sprained ankles set him back, as much mentally as physically since the first forced him to miss all of training camp.

"That (first) ankle sprain was pretty bad," he said. "When I came back, I was still unhealthy and then I rolled it again. I'm finally starting to feel healthy. You learn a lot of the little things throughout training camp. I missed a lot of plays. We pretty much put in our whole offense in camp and I was out. And then being in and out of the rotation was hard mentally."

Valentine credited teammates like Jimmy Butler, Rajon Rondo and Dwyane Wade for keeping his spirits up.

"If you get an opportunity, you're either going to do it or you aren't," Wade said. "And that kid is doing a good job with his opportunity right now."