Galleries Videos CONTACT ADVERTISE
Girne 13°
scattered clouds
BUSINESS EDUCATION ENTERTAINMENT HEALTH POLITICS SCIENCE SPORTS TECHNOLOGY
08:11 Stick it to “The Man” at the Zero Trust Security Summit
04:37 What to Consider When Starting Your Own Business
10:17 Clover POS System for Dental Offices
06:14 How Mobile Technology is Revolutionizing the World of Poker
20:31 The Importance of Banks in Our Lives
05:46 Things to Consider When Hiring a Criminal Defense Lawyer
09:15 Couple T-shirts are ideal for spicing up relationships
09:01 Laser Tattoo Removal and Its Amazing Benefits
07:58 Consolidate your medical bills with a debt consolidation
19:48 Is your mind a certain people? Elina Tanskanen gives a task, which you...
BIST
122540
GOLD
298.852
USD
5.9321
GPB
7.7873
EUR
6.5570
Breaking News
Why Go for Physical Therapy and How to Find the Best Therapist
Close

Daytona 500 picks and predictions: Who will win NASCAR race?

NASCAR's top drivers will compete in the 59th Daytona 500 at Daytona International Speedway on Sunday, February 26, 2017. Chase Elliott captured the pole and Dale Earnhardt Jr. will start from the No. 2 spot. Here are our picks to win: Sentimental... 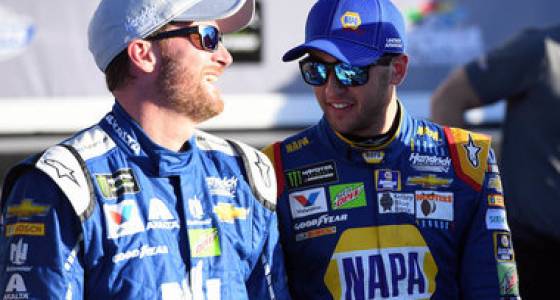 NASCAR's top drivers will compete in the 59th Daytona 500 at Daytona International Speedway on Sunday, February 26, 2017.

Chase Elliott captured the pole and Dale Earnhardt Jr. will start from the No. 2 spot. Here are our picks to win:

Sentimental pick: Martin Truex Jr. Look, it's not just a New Jersey pick by the state's largest media company rooting for the hometown boy. But, of course, that's part of it. The other part: Truex lost last year's Daytona 500 by four inches (that's a hundredth of a second), the smallest winning margin in the race's history. Winning this time would be justice.

You'll look smart if he wins: Ryan Blaney. He has not been mentioned much, but the kid has a shot -- especially with the Daytona 500 often making celebrities out of unknown drivers, like surprising winners Trevor Bayne (2011), Jamie McMurray (2010) and Ryan Newman (2008). Blaney has a resume, however, with three top-five finishes as a rookie in 2016.

Fans would love it: Dale Earnhardt Jr. He says if he wins the Cup this year, it'll be hard for him not to walk away. "I would like to race more, but if I win the championship, I'd have to consider going out on top," he said. "I mean, I don't know ... but I would definitely consider it. That's the last box I don't have checked really. There are a few races I'd like to win, but the championship would definitely be the icing on the cake for my career." So, why not start with a win Sunday?

It's fun to fantasize: Michael Waltrip. He has no shot in his final NASCAR race, but he's hoping to "figure out a way to get to the front, run up front and finish in the top 10." If that happens, the 53-year-old driver and two-time Daytona 500 winner, would "walk away proud."