Kyle Busch captured the first stage of the Daytona 500 Sunday, leading the race after 60 laps.Under NASCAR’s new championship points system this season, races are divided into three stages — with a playoff point awarded to the winner of the first two... 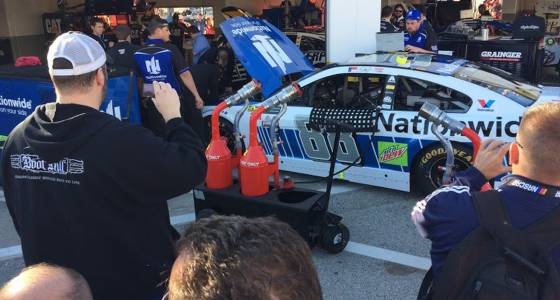 Kyle Busch captured the first stage of the Daytona 500 Sunday, leading the race after 60 laps.

Under NASCAR’s new championship points system this season, races are divided into three stages — with a playoff point awarded to the winner of the first two stages, and the race winner receiving five points.

Busch has one career victory at Daytona International Speedway, back in 2008. He finished third in last year’s race.

There have been six different leaders and 13 lead changes so far in a somewhat uneventful race.

Kevin Harvick grabbed the lead after the first 100 miles of the Daytona 500 Sunday. Harvick is looking for his third career victory in this race and his first since 2010.

Unlike the Duels and the Xfinity Series race this week, the drivers have been very patient in their handling of the Daytona International Speedway. Harvick, Jamie McMurray and Chase Elliott all held the lead at one time or another early on.

In a somewhat surprising move, all six Toyotas chose to head to the pits on Lap 17; a strategy the group hoped would allow them to remain among the leaders heading into the green-checkered finish for the first segment.

The first caution of the day came out on Lap 26 when rookie Corey LaJoie misjudged his exit to pit row and while trying to abort his entry, spun out hitting the wall instead. LaJoie was able to avoid the five minute penalty and make his way back into the field.

It must seem like déjà vu as Elliott, who was on the pole last year as a rookie but an early wreck forced him to finish the race in the back of the pack.

Dale Earnhardt Jr. began the race next to Elliott in the front row. It was his first race back after sitting out 18 races last season with a concussion. Earnhardt has four career wins at Daytona, the last coming in 2015, and 13 top five finishes at the track during his career.

Dale Junior: Has anyone mentioned Dale Earnhardt Jr.? NASCAR’s favorite son is back after missing 18 races last season with concussion-related symptoms. The NASCAR Nation rejoices.  … “Am I nervous at all about it?” he said. “ I’m nervous about it until I get in the car. I can think about it while I’m out of the car all day long. Of course I’m human, I’m going to be concerned and worry … but to be able to win the qualifying race and to be able to win the Daytona 500, you’ve got to race with no fear.”

Changes: Industry leaders -- including a handful of drivers—came together during the off-season and blew up the Chase format model. Races in the Monster Energy NASCAR Cup Series, Xfinity Series and Camping World Truck Series will now consist of three stages, with championship implications in each stage. The new format will award a playoff point to the winner of the first two stages, and the race winner will receive five points.

This year's Daytona 500 will consist of two 60-lap stages, followed by a final 80-lap stage to make up the 200 scheduled laps in the annual season-opening race.

Crashes: Given the chase for pints during the race, expect a handful of “Big Ones” as drivers will get more aggressive toward the end of each stage. Look for the action to rev up with about two laps to go during each segment.

There’s something new at today’s Daytona 500. NASCAR dramatically altered its racing format in the off-season, with drivers now able to earn points during different stages of races, which will also have planned caution periods. It will sort of be like having three races within one.

OK, there’s a lot to take in. Let’s try to break it all down:

What’s hasn’t changed: Points will continue to be accrued through the first 26 Cup series races and will carry over for the 16 drivers who qualify for the playoffs that consist of the last 10 races of the season. The operative number remains at four in a winner-take-all-finale in Homestead in November.

What are the stages? For today’s Daytona 500, Stage 1 ends on Lap 60, Stage 2 ends on Lap 120 and the race ends on Lap 200. There are different levels of importance and points associated with each stage in the race.

What about Stage 1? Drivers who are running first through 10th at the conclusion of Stage 1 will receive stage bonus points, starting with 10 points for first place, nine points for second place, and so on, down to one point for 10th place. Plus, the driver who finishes Stage 1 first will receive one playoff point to carry into the postseason, should that driver qualify. At the end of Stage 1, there will be a planned caution period for drivers to come down pit road.

What about Stage 2? This stage of the race begins when the green flag drops for the restart. The same point system is in place as it was for Stage 1. Drivers who are running first through 10th at the conclusion of Stage 2 will receive stage bonus points, starting with 10 points for first place, nine points for second place and so on. Also, the driver who finishes Stage 2 first will receive one playoff point to carry into the postseason. Just as at the end of Stage 1, there will be another planned caution period at the end of Stage 2. The final stage starts when the green flag drops.

What about the Final Stage? There are 80 laps left in the race, and the goal here is to win. Race points are then awarded to the entire field based on the order of their finish. The race winner receives 40 points, second-place finisher receives 35 points, third-place receives 34 points, fourth-place receives 33 points, and so on until you get to the drivers who finish 36th through 40th, who get one point each. The race winner will also get five bonus points to carry into the postseason.

Who came up with this system? Industry leaders — including a handful of drivers — came together during the off-season and blew up the old Chase format. Races in the Xfinity Series and Camping World Truck Series will also use the new stage point system.

Should I keep a calculator next to the TV during races? Wouldn’t be a bad idea. Now, let’s go racing.

Singer Jordin Sparks and former NFL player LaDainian Tomlinson were among the many celebrities in attendance at the Daytona 500 on Sunday. Sparks will sing the National Anthem before the race while Tomlinson served as an honorary starter.

Sparks, who competed on and won American Idol in 2007, also performed the National Anthem at Super Bowl XLII. But for Sunday’s race, she also had to make sure that she matched with the USAF Thunderbirds flyover.

“When I sing that big note at the end, you know, you want them to be flying over right on time,” she said. “There’s always a little bit more pressure when it’s live.”

Tomlinson, a former NFL MVP and part of the Pro Football Hall of Fame 2017 class, is excited to be the honorary starter and got some important advice before the race.

“Having that flag, Jimmie Johnson told me ‘just don’t drop it,’” he said. “I wasn’t a guy that fumbled a lot so I’m not really worried.”

Among the celebrities on hand for today’s 59th running of the Daytona 500 is Keanu Reeves, who is currently starring in “John Wick: Chapter 2.”

He was introduced during the drivers’ meeting, but he’s not here just to watch the race — he’s doing research. It was announced that he will star as a NASCAR driver in a new movie, “Rally Car.”

Mario Andretti greets fans at Daytona International Speedway before the start of the Daytona 500.

Mario Andretti greets fans at Daytona International Speedway before the start of the Daytona 500.

Former Daytona 500 champion Mario Andretti is back at the track where he won  50 years ago. Andretti addressed the NASCAR media before Sunday’s race.

Andretti says times have changed from when he took laps around the Daytona International Speedway. “Driving was different,” he said. “Now you’re just [accelerator] down to the floor.”

Andretti said his car was very loose during the 1967 race, and some suggested that drivers were afraid to pass him — allowing him to stay at the front of the pack. But there was a reason for that.

“I had to [race up front] because that’s where the car felt the most comfortable.

Owen Wilson, grand marshal for today’s race, has the responsibility of commanding the drivers to start the Daytona 500. Though, he might need a little practice.

“I’m just going to try to put some base into it and hope for the best,” he said.

His “Wedding Crashers" co-star Vince Vaughn, who was previously a Daytona 500 grand marshal, texted Wilson advice: Don’t watch Vaughn’s YouTube clip of his driver command, because he said it was perfection.

As for who is his favorite driver, Wilson — who stars in the upcoming “Cars 3” animated movie, picked an unusual one.

“Lightning McQueen would be my favorite, because I am contractually obligated to say that,” Wilson said.

American Idol winner Jordin Sparks and the Air Force’s Thunderbird demonstration squadron pilots will try to be in sync today for the National Anthem.

Sparks will be singing the song, while the pilots will be doing a fly over of Daytona International Speedway. The goal, the Thunderbirds said, is to soar over the speedway when Sparks sings “… and the home of the brave.”

But it will be tricky. Sparks says she thinks it will take her 1 minute, 36 seconds to complete the anthem. Meanwhile, the Thunderbirds will be trying to hit their mark while flying their jets just 3 feet apart from each other.

For the second consecutive year, the Daytona 500 is a sellout. And there were a lot of pro sports athletes among the big crowd.

They included Rob Gronkowski of the New England Patriots, Brandon Marshall of the N.Y. Jets, as well as the Magic’s Nikola Vucevic and Jeff Green.

Gronk was introduced at the drivers’ meeting. He met with media before the green flag dropped, and was greeted with calls of “Gronk!” by fanas and he went to pit row to greet drivers.