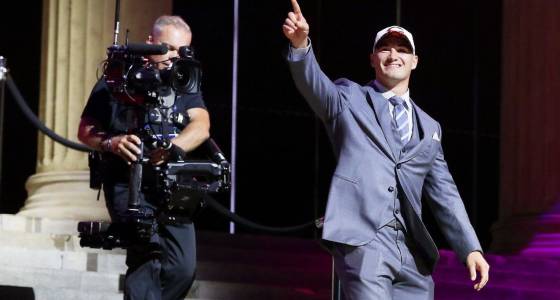 Not even the mock draft of San Francisco 49ers brain trust John Lynch and Kyle Shanahan's wildest dreams featured the Chicago Bears trading them three picks to move up one spot so they could take North Carolina quarterback Mitchell Trubisky. That move was a no-brainer for the 49ers, who weren't going to take Trubisky and were happy to get Solomon Thomas one spot later and about $900,000 cheaper. And the rookie GM and head coach spun the deal into more gold a few hours later, using Chicago's 2017 fourth-rounder to trade back into the first round and take a player at No. 31 (Reuben Foster) they'd considered taking at No. 2.

"This isn't that hard!" Shanahan and Lynch may have said, for all we know, as they benefited from the Bears' stunning largesse. But while the 49ers' front office was high-fiving, the rest of us were scratching our heads. And not for the final time. Our list of first-day draft head-scratchers starts in Chicago.

What were the Bears thinking? The short and obvious answer is that the Bears were convinced (A) that Trubisky is a franchise quarterback and (B) that some other team was going to trade with the 49ers and take him if they didn't. That's the only way it makes sense to trade four picks for a guy who started 13 college games and lost to Duke and North Carolina State in two of them. Trubisky needs to be Eli Manning or better to justify this move, which means he needs to unseat Bears free-agent signee Mike Glennon before too long. Meantime, I know the draft is about more than one year, but it's not as if Chicago's roster couldn't have used help elsewhere with those extra midround picks. No pressure, Mitch.

Did everyone go cuckoo for quarterbacks again? Was this a repeat of 2011, when Blaine Gabbert, Christian Ponder and Jake Locker all went in the top 12? It's possible. Kansas City spent two first-rounders and a third-rounder to move up and take Patrick Mahomes at No. 10, and Houston spent this year's and next year's first-rounders to go up to 12 and get Deshaun Watson. Is one of those guys Locker? Is one of those guys Gabbert? All we heard for months was that the quarterbacks in this year's draft need time to develop. Mahomes should get that behind Alex Smith and under Andy Reid, but the win-now pressure in Houston is going to put a spotlight on Watson from the get-go. Watson doesn't scare easily, but developing in the spotlight is a tough way to go.

What happened to the defense-heavy draft? So much talk about how deep and strong this draft was on the defensive side of the ball, and then eight of the first 12 picks are offensive skill-position players. The three quarterbacks we've already discussed, three wide receivers and two running backs. No offensive linemen, no tight ends. This is a collection of dudes who are going to show up in your preseason fantasy rankings in a couple of weeks, and the order of the day seemed to be "get the quarterback some help." Christian McCaffrey will do a million different things for Cam Newton in Carolina's offense, but it was still weird to see Dave Gettleman pass on all those defensive linemen who were there when he picked at No. 8. John Ross joining A.J. Green and Tyler Eifert in the Bengals' passing game is a dream for Andy Dalton, but that Cincy front seven isn't getting any younger. It was fun to see some conservative front offices get a little fantasy-crazy, but you wonder if some of them might regret not selecting some larger gentlemen in the top 10.

Why did all the Alabama guys fall? The Crimson Tide was a trickle by the time it reached the shore. Some thought six or seven Alabama players would go in the first round. Four did, which isn't bad, but the first one didn't go off the board until No. 16, when teenage cancer survivor TJ Onwuanibe fist-pumped his way through the announcement of cornerback Marlon Humphrey to the Ravens. That set off a bit of an Alabama run, with Jonathan Allen going to Washington at No. 17 and O.J. Howard to the Bucs at 19. And Foster sneaked in at the end of the round when the Niners came back in to get him. Not a bad haul for the Tide, but not as brilliant as was expected. I'd expect Cam Robinson, Ryan Anderson and maybe Tim Williams to add to the ranks of newly minted Bama pros in the second round Friday night. Still, Thursday's little group tumble makes you wonder if there's something to this idea that NFL teams worry Nick Saban maybe grinds these guys down a bit.

Is Cleveland really going to go with Brock Osweiler after all? I still don't think so, but the Browns managed to make three picks in Thursday's first round and still not come away with a quarterback. They appear to have come away with three very exciting players -- stud Texas A&M pass-rusher Myles Garrett, do-everything Michigan safety Jabrill Peppers and dazzling Miami tight end David Njoku. And they picked up the Texans' 2018 first-round pick in the deal that landed Watson in Houston. But ... Watson is in Houston, Trubisky is in Chicago, Mahomes is in Kansas City. If Cleveland's plan still is to dump Osweiler and add a leftover veteran, the Browns conceivably could head to camp with a Colin Kaepernick-Cody Kessler quarterback competition. Too late to get that on "Hard Knocks"? Trading down and amassing picks is, in general, the best way to draft. But at some point, the Browns are going to need a real quarterback. If one of the three guys who went Thursday does anything like Carson Wentz did last year, the ridicule will only ratchet up.

So much for dropping due to off-field issues. Ohio State cornerback Gareon Conley spent the 48 hours before the draft trying to convince teams of his innocence of a rape allegation that surfaced Tuesday. It worked. The Raiders took him at No. 24. Peppers and Foster, we learned in the past week, both tested positive for dilute samples at the combine and will enter the league in Stage 1 of the drug program. The Browns took Peppers at 25 and the Niners took Foster at 31. These are incredibly talented players, and these three teams decided they were worth whatever risk they brought. The Conley pick is the riskiest, but if he ends up proved innocent he's one of the steals of the first round. And while Foster's fall surely had something to do with concerns over his shoulder as well as the combine drug test, he could end up being an even greater bargain. Just goes to show the influence of short-term thinking on these big decisions. These kids get four-year contracts that are longer than the average tenure of a coach or GM. The Raiders have only two more years to win a title in Oakland. And when you work for the Browns, how can you possibly know how much time you'll get to deliver a winner. More and more, it seems time is short and risks are worth taking.