David Wright back as DH | Mets lineup vs. Astros

PORT ST. LUCIE, Fla. -- Many of the Mets heavy hitters are in the lineup for Monday's Grapefruit League game against the Houston Astros, but David Wright is still only being used as a designated hitter.  Wright got his first spring... 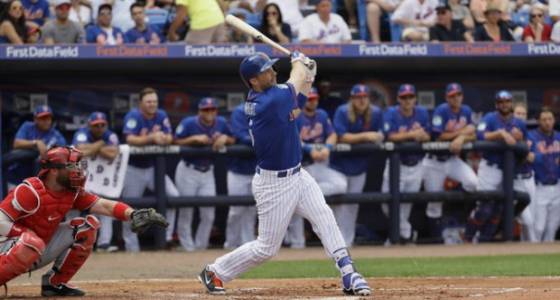 PORT ST. LUCIE, Fla. -- Many of the Mets heavy hitters are in the lineup for Monday's Grapefruit League game against the Houston Astros, but David Wright is still only being used as a designated hitter.

Wright got his first spring training at-bats Saturday in the spring training home-opener against the Washington Nationals. He was hitless in two at-bats, but it was still productive in that he was able to see how his back and neck would hold up at the plate.

Last year, Wright couldn't even turn his neck to face the pitcher. Now that he's had disk fusion surgery, he's able to see the pitcher and turn to see the plate. He's still getting acclimated to game speed and learning how to deal with the spinal stenosis in his back, but he all indicators were positive following his first two competitive at-bats in nearly a year.

How does Terry Collins feel about Tebow?

Lucas Duda remains out with a sore back and hips and Wilmer Flores will once again fill in at first base. Jay Bruce, who has been working out at first base, will be back at his natural position in right field.

Red hot Michael Conforto gets the day off.

Left-hander P.J. Conlon starts on the hill for the first time. After going 12-2 splitting time in Low Class-A and High Class-A last season, Conlon was named the Mets' minor league pitcher of the year. A converted reliever, Conlon isn't the hardest thrower but his unconventional delivery makes him especially difficult for hitters to pick up.

Here is the Mets lineup for Monday's game against the Astros: