Dale Earnhardt Jr. revives racing career on his own terms

The world is no longer a blur to Dale Earnhardt Jr. despite the demands of a job that call for driving nearly 200 miles an hour occasionally.There were times over the last year he only saw darkness, a wobbly self of the man he once was, of everything that... 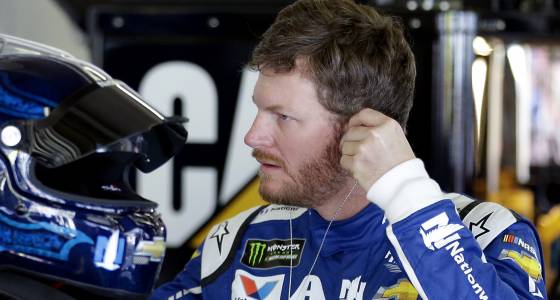 The world is no longer a blur to Dale Earnhardt Jr. despite the demands of a job that call for driving nearly 200 miles an hour occasionally.

There were times over the last year he only saw darkness, a wobbly self of the man he once was, of everything that defined his existence. All he had to do was look at the family pictures. The Earnhardts race for a living … health and happiness and death be damned.

Racing killed his daddy, bringing with it an emotional tsunami that no one should ever have to bear. Junior processed the pain with the maturity of a troubled 26-year-old kid and accessorized with a trifecta of beer, booze and babes. Come on down to “Club E,” as he called the playpen in his house, and have a few cold ones.

Life was good, even though it wasn’t.

The partying of yesteryear had nothing to do with his latest hazy situation. Multiple concussions threatened to cut short his NASCAR career and take out the most revered driver in the sport, a heavy burden to carry when you’re just trying to walk and see straight.

He once traveled in North Carolina from Charlotte to Raleigh with his then-fiancée Amy Reimann to pick out food for their New Year’s Eve wedding and had to put his head between his legs. The road signs and everything else kept jumping in his head, making him dizzy.

“I was scared to death that I was going to be stuck with that all my life,” he said.

He would stumble during his physical rehab work with Amy.

“I couldn’t put one foot in front of the other without falling over,” he said,  “like a drunk-driving test.”

He would mosey back to the track when he started to feel better, and would occasionally run into Richard Petty in the garage area. Instead of the usual handshake and hello, Petty would put his arm around him and say, “Are you taking care of yourself? Don’t do anything you don’t need to be doing.”

Fear and doubt are words that put a driver in no-man’s land. Leaving it all? He paused often, contemplating “what that side of life would be like.”

It all became overwhelming at times, and Earnhardt starting handicapping the odds of a comeback in his head after missing the last 18 races of the season because of concussion-related symptoms.

He once thought there was a 90 percent chance that he would never come back, then 50, and then lower.

He has stopped counting now as he prepares for Sunday’s Daytona 500, a race he has twice won as part of his 26 career Cup victories.

Hamlin charged past Dale Earnhardt Jr. with one lap remaining Thursday night to deny Earnhardt a victory a 150-mile qualifying race that Earnhardt dominated. Earnhardt led 53 of the 60 laps in the...

Hamlin charged past Dale Earnhardt Jr. with one lap remaining Thursday night to deny Earnhardt a victory a 150-mile qualifying race that Earnhardt dominated. Earnhardt led 53 of the 60 laps in the...

Dale Earnhardt Jr. is very much back and in the front row alongside Hendrick Motorsports teammate Chase Elliott. Junior got there on qualifying speed, and had speed again in the Thursday’s second qualifying Can-Am Duel, leading 53 of 60 laps. But he got lost in the bump-draft shuffle with two laps to go and finished sixth.

Now you see him, now you don’t.

That captures the gist of Junior’s 2017 Monster Energy Cup Series season. He’s here in the moment, but don’t assume anything for the future. He is giving himself a handful of races to sort things out, physically, and gather his thoughts on moving forward.

He has not reupped his expiring contract with Hendrick, something that would be a non-issue if the uncertainty of the concussion deal wasn’t a factor.

But uncertainty should not be confused with an absence of clarity. Earnhardt isn’t going to try to ride this thing out if he gets hurt again. He’ll likely be gone, too, if he wins his first Cup title: a walk-off championship and see ya.

“To come back this year, win a championship, it would be hard not to hang it up,” he said during NASCAR Media Day at Daytona International Speedway earlier this week.

The 26-year-old kid has become a 42-year-old man now. His net worth is reportedly $300 million, but the pile of money pales in comparison something that is priceless:

His marriage to Amy. She’s the one. They want a family, happiness and health ’til death do us part. Earnhardt has no intentions of letting ego and pride and recklessness spoil the happy ending.

His family comes first, even if it crushes everyone else. NASCAR Nation is deeply devoted to Earnhardt, voting him the sport’s most popular driver 14 consecutive seasons. He is a stock-car messiah in sport hurting for heroes, at least marketable ones. Many traditional fans have left. Baby-boomers who took a peek at the height of popularity in the early 2000s have stopped looking. Millennials are too busy tweeting to care.

But Earnhardt moves the needle big-time in cross-generational ways.  It leads to other pressures, these from the inner circle that includes his primary sponsor, Nationwide, and his boss, Rick Hendrick.

“I think he’s got a lot of racing left in him,” Hendrick said. “If he wins a championship, I’ll try to talk him into doing it again. I’m a good salesman. Jeff Gordon told me he was retiring two or three times and I talked him into staying. I’m a car salesman.”

But the squeeze of self-preservation is tighter. Earnhardt knows that the frightful moments of bouncing around in a stock car are everlasting. He’s already donating his brain to science, a powerful homage to his legacy.

The summer of 2016  was not the first time things got bumpy in his career.  He counts four concussions during his racing career dating to 1998, which likely includes some incidents in which he managed to avoid a diagnosis.

He’s done the math and understands the ramifications.

Earnhardt wants in, but only on his terms. He’s become a better man through all the chaos  in his life, and therapy has helped considerably. His media session Wednesday sounded like a confessional at times, without the couch.

“I don't see any reason not to be very transparent and honest,” he said.  “So far it's not bit me in the ass yet.  I feel comfortable putting it all out there.  If I was younger, I might be a little more guarded about that part of me.  I'm on the backside of this.  What's there to hide?”

It’s all clear to him now. Even if he stumbles and things get fuzzy again, his purpose and direction are unencumbered.

With or without the left-leaning tilt of a rumbling stock car.