PITTSBURGH -- Addison Russell set a career high with 4 hits and Jason Heyward homered for the third time in four games and drove in 4 runs as the Cubs jumped on the Pittsburgh Pirates early in a 14-3 victory on Monday night.Ben Zobrist added 3 RBIs for Chicago... 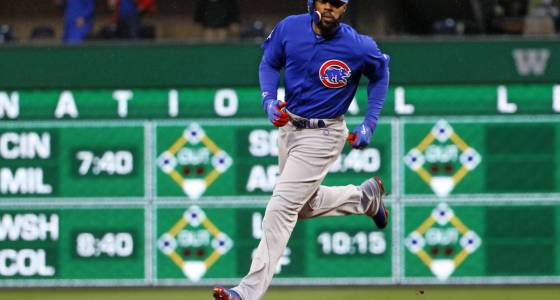 PITTSBURGH -- Addison Russell set a career high with 4 hits and Jason Heyward homered for the third time in four games and drove in 4 runs as the Cubs jumped on the Pittsburgh Pirates early in a 14-3 victory on Monday night.

Ben Zobrist added 3 RBIs for Chicago as the defending World Series champions won for the fifth time in six games. Anthony Rizzo had 3 hits to extend his hitting streak to 13 games. Kyle Schwarber, Kris Bryant and Miguel Montero all had 2 hits apiece for the Cubs.

Chicago scored 4 runs with 2 outs in the first inning off Chad Kuhl (1-2) and added 5 more in the second to give Brett Anderson (2-0) all the breathing room he would need.

Anderson struggled at times with his command, walking 6 in 6 innings while striking out 3 and allowing 3 runs, 1 earned.

The Cubs are starting to get it going after a sluggish start, averaging 8.8 runs during their recent surge to first in the NL Central. It has helped take some of the pressure off a pitching staff that is struggling to get any sort of consistency from its starters.

At cold and wet PNC Park, it didn't matter.

Kuhl, who pitched well while never allowing more than 2 runs during his first 3 starts, ran into trouble quickly. He retired the first two batters he faced when everything fell apart. Anthony Rizzo and Zobrist walked and Russell brought Rizzo home with a single to right. Heyward then took a Kuhl offering and sent it into the seats in right-center field to make it 4-0.

Things got no better for Kuhl or the Pirates in the second. With All-Star center fielder Starling Marte serving a drug suspension until July, the Pirates have been forced to shuffle their defense, moving Andrew McCutchen back to center field and platooning in right.

The initial results have been less than promising. Four of Chicago's 5 hits in the second went to right, with 3 runs scoring when Osuna couldn't handle a fly ball by Zobrist to the wall. Even Anderson managed an RBI on a single up the middle.

By the time Kuhl left the mound with 2 outs in the second in favor of reliever Trevor Williams, the Pirates trailed by 8 and their three-game sweep of the Cubs at Wrigley Field earlier this month felt like a distant memory.

Anderson didn't exactly cruise during his 6 innings of work -- retiring Pittsburgh in order just once -- but was never in any danger of losing the massive cushion.

Cubs pitching coach Chris Bosio is taking a leave of absence to deal with a personal matter and is expected to miss the rest of the road trip. Bullpen coach Lester Strode will fill in for Bosio, with Quality Control coach Henry Blanco taking over for Strode in the bullpen.

Pittsburgh placed utility player Adam Frazier on the 10-day disabled list with a strained left hamstring. The Pirates called up reliever Dovydaus Neverauskas. The 24-year-old from Lithuania made his major league debut in the eighth and allowed a run on two hits in 1 2/3 innings with a strikeout.