Cubs hope to get a leg up on health

With injured infielder Tommy La Stella testing his left hamstring on the agility field Saturday morning, Chicago Cubs manager Joe Maddon stressed he didn't want his players to push themselves too hard early this spring."Only concern I have right now... 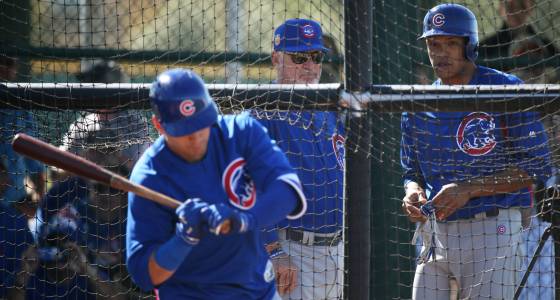 "Only concern I have right now is legs, and if you see them in the games the next couple days not running,  which you perceive is the hardest, I don’t want them to right now," Maddon said before the Cubs' exhibition opener.

"I know we have Respect 90 (slogan), but the rain (last weekend) inhibited our legs from getting in shape. I’m asking them not to bust. Run hard but not take it to the next level."

La Stella was listed as day-to-day after experiencing tightness.

Maddon said he would limit his players to two at-bats in early games unless a player wanted an extra bat or served as the designated hitter.

Photos as the Cubs practice at spring training in Mesa, Ariz.