MESA, Ariz. — Wade Davis was a promising starting pitcher when he made his major-league debut for Joe Maddon and the Rays almost eight years ago. Then he was a reliever, then a starter again, then a reliever. 3 Weeks Ago1 Week Ago3 Weeks AgoNow he gets... 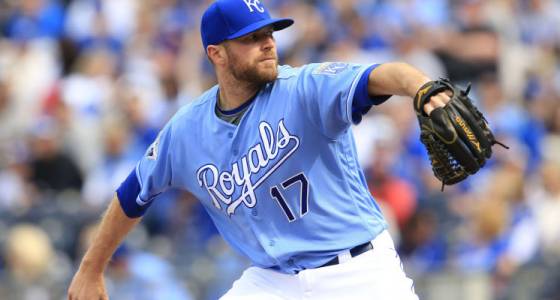 MESA, Ariz. — Wade Davis was a promising starting pitcher when he made his major-league debut for Joe Maddon and the Rays almost eight years ago. Then he was a reliever, then a starter again, then a reliever.

Now he gets the ball from Maddon once again — only this time as the closer for the Chicago Cubs.

Much has changed for Davis over the years, and not much at the same time.

"The only way he's changed is he is a relief pitcher," a chuckling Maddon said. "He was a starter when I first met him. He's the same cat. He's very deliberate in his methods and even conversationally."

That's just fine with Maddon, who is hoping for more of the same from Davis after a dominant run with Kansas City. While the Dodgers, Giants and Yankees spent big money on closers over the winter, the World Series champions acquired Davis in a trade with the Royals for outfielder Jorge Soler.

So far, the transition looks like one of Davis' relief appearances: smooth and efficient.

"It's been pretty easy," said Davis, who will make $10 million this season in the final year of his contract. "Everybody's been really easy to get along with and get to know and the staff has been really good, so it's been easy to get acclimated to all the stuff."

But that was his final year with the Rays, who traded the 6-foot-5 right-hander to Kansas City. The Royals put Davis back in the rotation before returning him to the bullpen late in the 2013 season.

Davis, Kelvin Herrera and Greg Holland combined for an overwhelming relief presence as Kansas City made consecutive World Series appearances, winning it all with Davis on the mound in 2015. Davis had 47 saves and a 1.18 ERA over his final three seasons with the Royals.

"He's got about three plus-plus pitches in his fastball, his cutter and his curveball," Cleveland second baseman Jason Kipnis said. "He's that guy. And it's a down angle because he's coming from a tall slot. He's a competitor. It's weird. He's a great mix between never giving in and coming straight at you. He's not going to walk you. … His ability to literally live on the outer black of the plate makes it very hard to get any good swings off him."

Davis uses his starter's repertoire to his advantage in the bullpen. He also gained confidence through his experience in multiple roles.

"I think it helps your mind, knowing that no matter what the situation is, you know, if that's what you're asked to do, that's what you've got to do and you've done it before," he said. "So it's not new to you."

Davis, 31, had a 1.87 ERA and 27 saves last season, but he was limited to 431/3 innings because of a forearm injury. The Cubs sent one of their trainers to examine him before the trade with the Royals was completed in December. They also signed Koji Uehara to a $6 million, one-year contract.

With Hector Rondon also in the fold, the Cubs have some options should Davis experience any health issues. But Davis said he feels good.

"Everything has gone really smoothly (in) spring training," he said. "Bullpens been really good, progressing well, so I think those are all good things."

Davis came back to pitch for Kansas City in September, posting six saves and a 1.04 ERA in his final nine appearances. The Royals also missed the playoffs for the first time since 2013, giving Davis more time to train.

"I think you make adjustments every year," he said. "Your body changes every year just in general. … Took advantage of the extra month that I had this winter and got back to where I wanted to be strength-wise and confidence-wise physically, so that's a big deal."