After losing all three starting defensive linemen to graduation, the Colorado football team is finding a variety of ways to fill those holes.They're even taking another look at George Frazier.The fifth-year senior tight end and fullback is practicing at... 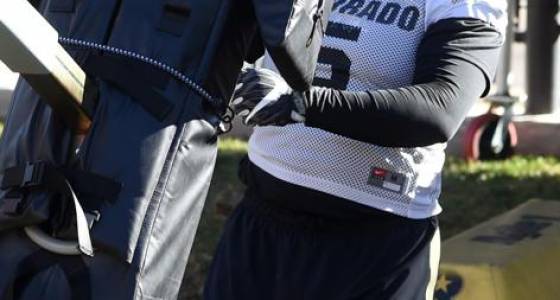 After losing all three starting defensive linemen to graduation, the Colorado football team is finding a variety of ways to fill those holes.

They're even taking another look at George Frazier.

The fifth-year senior tight end and fullback is practicing at defensive line this spring.

"I thought about it and asked (head coach Mike MacIntyre) about it, and once I brought it up, he knew exactly where I was going with it," Frazier said. "We were side by side with (the idea)."

Frazier, in fact, began preparing for this during the 2016 season.

Primarily a blocking tight end, he began last season weighing 260 pounds, but during the season added 20 pounds to his 6-foot-2 frame. He has maintained that weight, coming into spring at 280 pounds.

"I believe at the end of the season I was able to hold this weight and still move around," said Frazier, who is working at defensive end.

In 2014, when he was a redshirt freshman, Frazier became the first Buff since 2005 to play on both sides of the ball in the same game. He actually played all 12 games that season on offense and 10 games on defense.

That season, Frazier caught three touchdown passes and ran for a score on offense, while racking up 15 tackles and three quarterback hurries in 195 snaps on defense.

Frazier played exclusively on offense the past two seasons. He caught six passes for 31 yards and a touchdown in 2015. This past year, he played a lot, but didn't catch any passes. He hasn't run the ball since 2014.

A team captain last season and one of the more respected players on the roster, Frazier said he felt a switch to defense for his senior year might help the Buffs.

"I just kind of realized that we had our starting three D-linemen (graduating), and knew we needed depth at D-line," he said. "I just decided to step up to try to help the team out.

"I love it. I'm big and pretty physical, I believe, so I feel like I can do my job (on defense)."

"It's a lot of competition," Frazier said. "It just makes you better."

Frazier will also continue to work at tight end and fullback. He's one of only four tight ends on the roster this spring, along with Chris Bounds, Dylan Keeney and walk-on Derek Coleman.

Despite a short offseason, MacIntyre said the Buffs have looked good through the first two practices.

"Since we had the bowl practice (in December), a lot of the younger guys are farther ahead than they would have been," he said. "There's not as much rust ... but our guys have been in the system for a while, so they kind of know what's going on."

Sophomore Brett Tonz, who has played defensive line in his first two seasons in the program, is working with the offensive line in the early going of spring drills. ... Tailback Donovan Lee is also working at defensive back. Lee, who had 414 yards in total offense in 2015, had just 135 yards in limited playing time last season. ... Safety Evan White, who has returned to the team after being dismissed a year ago, is "bigger and stronger" than he was before, MacIntyre said. White is working at safety and at the "Buff" position - a safety/linebacker hybrid - along with returning starter Ryan Moeller.