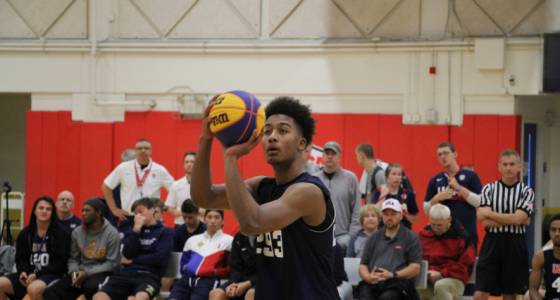 COLORADO SPRINGS — D'Shawn Schwartz has the whole big-man-on-campus thing down.

As the final seconds ticked away in Sand Creek's victory Saturday night against Thompson Valley in the Class 4A state playoffs, Schwartz graciously accepted low-fives from several pint-sized fans behind the Scorpions' bench, all of them giddy at getting a close-up with the future Colorado Buffalo. No sooner does Schwartz emerge from the Sand Creek locker room following a 27-point, 17-rebound performance than he is beset with photo requests. Again Schwartz is all too happy to oblige.

With his team in the Sweet 16 and graduation on the horizon, life couldn't be sweeter for the heralded Colorado basketball recruit. Yet Schwartz understands the campus soon will be much bigger, his basketball stage far brighter. He is eager for the new challenge and plans to be in Boulder working out with his new CU teammates in June.

"This is the farthest I've ever been (in the playoffs), so it feels good," Schwartz said. "Coach (Tad) Boyle has been great to me and has been completely honest with me since day one. That's what I've always liked about him."

While Schwartz was born and raised in Colorado, both his parents experienced nomadic lives before settling in Colorado Springs. His father, Michael, was born in New York but eventually landed at Coronado High School when his family relocated to Colorado. Schwartz' mother, Reshana, was raised in a highly-mobile military family, spending a large portion of her childhood in Germany before arriving at Wasson High School when her father was transferred to Fort Carson. They met while working at separate stores at the Citadel Mall.

D'Shawn Schwartz is the couple's only child. They report the major growth spurt that led to their son's current 6-foot-7 stature occurred around seventh grade. That he will be able to continue his career so close to home has been a dream come true.

"Going into this, we didn't know how hard it was to really get looked at by a coach," Michael Schwartz said. "Much less get mail from a coach. Much less get an offer. Knowing now how hard it really is, it's a huge weight that's been lifted that we weren't really aware of at the time.

"To know that he has always wanted to go Pac-12, winding up in our back yard at a great school, it's just the perfect story of us."

The arrival of Schwartz and his 2017 freshman classmates, Tyler Bey and Evan Battey, coincidentally will occur at a critical juncture of Boyle's CU tenure. With the 2016-17 season shaping up to be the Buffs' second disappointing season in three years, Boyle and his staff will welcome what is on paper the highest-rated recruiting class of his seven-year stint with the Buffs.

Schwartz, ranked as the No. 64 recruit in the 2017 class by Rivals.com, is ranked in the top 10 overall in the state in scoring and ranks second in Class 4A at 25.4 points a game. With Battey and Bey, Schwartz has the Buffs' 2017 freshman class ranked at No. 22 by Rivals. He has attended several CU games this season and, despite the team's struggles, believes a return to prominence isn't that far out of reach.

"It just looks to me like they're not really gluing together," said Schwartz, whose team continues the state tournament Wednesday at D'Evelyn. "Derrick White is a hell of a player. I'm glad I even got to talk to him. Talent-wise, I still think they're a top 25 team. They just haven't put it together."