CaptionCloseARLINGTON, TX - DECEMBER 18: Ezekiel Elliott #21 of the Dallas Cowboys celebrates after scoring a touchdown by jumping into a Salvation Army red kettle during the second quarter against the Tampa Bay Buccaneers at AT&T Stadium on December 18,... 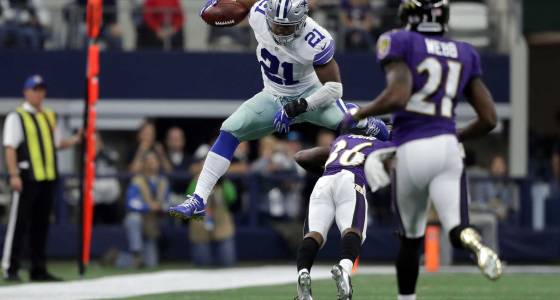 ARLINGTON, TX - DECEMBER 18: Ezekiel Elliott #21 of the Dallas Cowboys celebrates after scoring a touchdown by jumping into a Salvation Army red kettle during the second quarter against the Tampa Bay

Ezekiel Elliott is the latest in a long line of extraordinary Dallas Cowboys running backs.

The fourth overall pick turned in the greatest rookie campaign in franchise history, running for a league-high 1,631 yards with 16 touchdowns.

Elliott is undeniably electric, a punishing blend of size and athleticism capable of incredible feats.

Though, Hall of Famers Tony Dorsett and Emmitt Smith would prefer he actually stay on his feet.

Hurdling is in Elliott’s blood – his mother competed in the heptathlon at the University of Missouri, and he was a state champion hurdler in high school.

Smith, the NFL’s all-time leading rusher, would like to see him kick the habit.

“Get on the ground as quickly as possible,” Smith told the Star-Telegram. “Every time I watch somebody run, I’m looking very closely, very tentatively, seeing how they fall because a lot of things happen when you fall.”

That’s about the only negative thing either Dallas legend had to say about Elliott.

“He’s behind his shoulder pads,” Smith said. “He’s always falling forward. Great vision, tremendous speed, got a hell of a jump cut, and I mean he’s playing chess while others out there are playing checkers. I appreciate that. He’s a thinker. He’s a smart guy, and I love watching him run.”