Could the Colts release Dwayne Allen and pursue Martellus Bennett?

The Indianapolis Colts had a decision to make at tight end last offseason: Dwayne Allen or Coby Fleener? The Colts could afford to sign only one, and they decided to go with Allen because of his all-around skills in the pass and run games.@MikeWellsNFL Who... 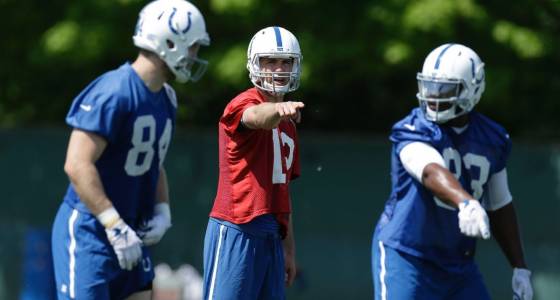 The Indianapolis Colts had a decision to make at tight end last offseason: Dwayne Allen or Coby Fleener? The Colts could afford to sign only one, and they decided to go with Allen because of his all-around skills in the pass and run games.

@MikeWellsNFL Who is the Colts best TE on the roster according to the team? Would cutting Allen be a possibility to pursue Martellus?

Mike Wells: That would be a bad decision for multiple reasons. First off, Martellus Bennett is the best tight end on the free-agent market. He’s in line to earn a nice hefty pay raise after 55 receptions for 701 yards and seven touchdowns last season with the Super Bowl champion New England Patriots.

The Colts have more pressing roster needs than to worry about trying to sign a player like Bennett, particularly when they already have Allen, Erik Swoope and possibly Jack Doyle (if they’re able to re-sign him) on the roster. Those three tight ends are more than capable of doing the job.

You can say Allen probably didn’t have an eye-popping season after signing a four-year, $29 million contract last offseason. He finished with 35 receptions for 406 yards and six touchdowns while playing 14 games. What doesn’t show up on the stat sheet is Allen’s blocking ability. You can also argue that Doyle had a better season than Allen. But cutting Allen would be a significant shocker, and there hasn't been any indication of that happening.

As far as who is the best tight end on the Colts' roster, you can say Doyle and Allen are closer to being No. 1 and No. 1a than Allen and Fleener were while they were teammates in their first four seasons. That's because Doyle and Allen can both catch and block. Fleener is a pass-catching tight end. Doyle proved last season that he's more than blue-collar, blocking tight end. He had 59 receptions for 584 yards and five touchdowns. I asked Doyle about his pass-catching skills last season, and he reminded me that he showed off that part of his game while at Western Kentucky, where he had 162 receptions for 1,769 yards and eight touchdowns in his four seasons. Now it's a matter of whether the Colts can afford to re-sign Doyle, who will be one of the top tight ends on the free-agent market.