The Cleveland Browns are set up for what could be a solid opening week to free agency -- and a solid first round in the draft at the same time.And they could do it by acquiring only one player in March.The Browns simply have to convince the New England Patriots... 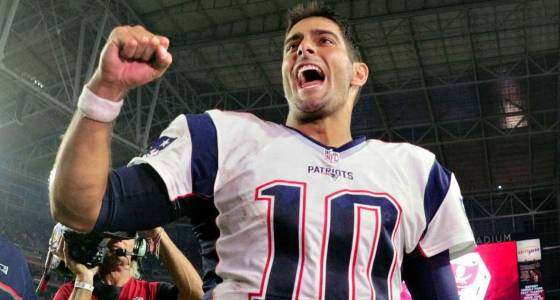 The Cleveland Browns are set up for what could be a solid opening week to free agency -- and a solid first round in the draft at the same time.

And they could do it by acquiring only one player in March.

The Browns simply have to convince the New England Patriots they should trade quarterback Jimmy Garoppolo, then they should take their shot with a legitimate offer -- which would start with the 12th pick in the draft. It might take more. It might take another pick in 2018. It might even take another first-round or a second-round pick, but the Browns owe it to themselves to do the work to see if they can complete the deal.

As free agency arrives, the Browns are staring down the barrel of a 2-14 season with their current roster. The only thing they've done at quarterback is cut one player.

Yes, there is time to stock the roster, but if they can't improve at the most important position, they'll be spinning their wheels for another year and this same discussion will be taking place in 2018.

The other option after Garoppolo appears to be Tyrod Taylor, who is expected to be released by the Bills. Taylor is a better player than he's given credit for, but the vibe about signing him would not be the same as trading for Garoppolo.

A deal for Garoppolo would combine with the knowledge that they garnered on Myles Garrett at the combine to make for a successful week. They could then look forward to the rest of the draft and know that they are adding a premier pass-rusher and a quarterback to a roster that needs both.

Imagine adding a player at each of the two most important positions on the team with the capital from one first round. Garrett and Garoppolo would be something to strut about coming out of the draft and free agency.

One decision is totally in the Browns control. They can say today that they are going to draft Garrett, though it's prudent to wait and ensure he doesn't step on a rake between now and the end of April.

Garoppolo is more of a challenge. ESPN's Adam Schefter reported last week that New England is unlikely to trade him, and that's a logical position. Tom Brady will be 40 before the 2017 season, and at that age even he might give in to Father Time.

The Patriots would be wise to have a backup ready, and the reviews for Garoppolo around the league are positive. If he's that good, it would make sense for New England to figure a way to keep him.

But if there is any wiggle room on New England's part, the Browns owe it to themselves to check into the possibility. It's possible that even the Patriots have a price. The Super Bowl champs might relish the idea of starting the 2017 season with the 12th pick. The rest of the league might not be thrilled, but all's fair in love and quarterbacks, and the Browns have to get one.

At some point, the Browns have to take their shot at a signal-caller.

They have to be decisive in their evaluation and bold in their actions.

If they look back and realize they got Garrett and Garoppolo to go with all the other draft picks they'll have, the vibe about the 2017 season changes for the better.

It's been a long time since those words applied to the early part of a NFL offseason in Cleveland.