LOS ANGELES >> The fact is, health is only one piece of the puzzle. So even though Doc Rivers looked down his bench Sunday and saw his full complement of players, he said it could be a while before the Clippers fully return to form.It was a plea for... 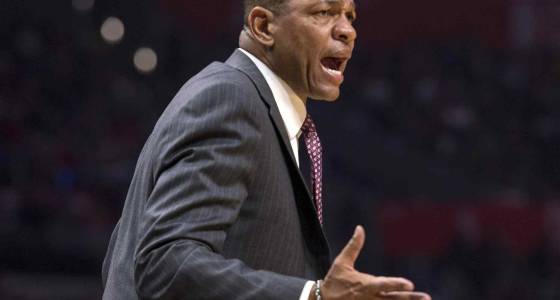 LOS ANGELES >> The fact is, health is only one piece of the puzzle. So even though Doc Rivers looked down his bench Sunday and saw his full complement of players, he said it could be a while before the Clippers fully return to form.

It was a plea for patience at a time the Clippers can least afford to wait.

“It’s as healthy as we’ve been all year,” Rivers said. “Now we’ve got to get our timing and our rhythm back, because haven’t played with this group and that may take a little bit. But it’s good to have it.”

The problem is that in a Western Conference the Clippers began the season on top of, they now must try to make up ground — or at least not lose any. The Clippers are clustered with Utah, Memphis and Oklahoma City in the middle of the conference standings, with only a handful of games separating the fourth- and seventh-place teams.

There is a dramatic different between a first-round matchup against, say, the Jazz while holding homecourt advantage, and going on the road to San Antonio as a seventh seed.

“I can honestly tell you I haven’t looked at the standings,” Rivers said. “To me, once we had all the injuries and dropped games, to me it’s all about just being right for the playoffs and being healthy and having good rhythm.”

The Clippers have finished in the top half of the conference in each of the last four seasons. After closing the book on February with Sunday’s game, the March schedule will be the key to where the Clippers finish.

“It’s funny,” Rivers said. “We have a lot of home games — we don’t travel a lot — but March is brutal when you look at our schedule. It is brutal. But it is what it is.”

The Clippers play half of their 18 games in March at home, but will play a staggering six back-to-backs, starting Friday and Saturday in Milwaukee and Chicago. Their March slate kicks off Wednesday against the explosive Houston Rockets.

Rivers said he will start paying closer attention to seeding once the playoffs draw closer. Until then, he will take a more holistic approach and let the playoff race take care of itself.

“If I think there’s something we can do about it late, you do,” he said, “but right now it’s more about getting it right and giving yourself a shot. … It’s not much you can do, worrying about seeding. I learned that early on as a player. I can’t control those other games that are going on.”

Rest of the year

Cleveland is starting to rest LeBron James, and San Antonio has rested players all year.

With the playoffs about six weeks away, and the Clippers a virtual lock to play in the postseason, Rivers might generally like to start getting his players some days off. The circumstances, however, are unique.

“Our guys have had rest,” Rivers said, referring to the long swaths of time Blake Griffin and Chris Paul have missed due to injuries.

“Having said that,” he added, “there are a couple games in March that we’ve already circled that depending on how they’re feeling, we feel like we should probably rest. We have to watch to see how their minutes go up into those games, but we’ve already identified two, for sure.”

Those plans are not specific to any player, Rivers said, but it’s likely that reducing DeAndre Jordan’s burden will be a top priority. The All-Star center has appeared in all 59 games the Clippers have played. That’s not strange, however.

The durable Jordan appeared in all 82 games for three straight seasons before missing five last year.