PLAYA VISTA >> The last time the Rockets and Clippers met, Chris Paul was sidelined, James Harden had a triple-double and the night ended with the entire Rivers family — those who work for the Clippers at least — ejected and watching a... 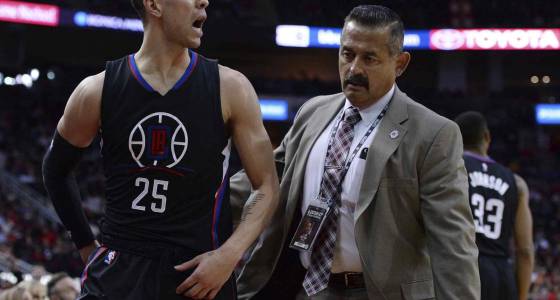 PLAYA VISTA >> The last time the Rockets and Clippers met, Chris Paul was sidelined, James Harden had a triple-double and the night ended with the entire Rivers family — those who work for the Clippers at least — ejected and watching a 24-point loss from the visitors’ locker room.

“Half the team was thrown out the last time,” Doc Rivers said prior to Tuesday’s practice. “Coach I heard was thrown out, I’m not sure.”

The Clippers will have Paul and, yes, both the Riverses when the Rockets come to Staples Center on Wednesday. Whether the result will be any different, remains to be seen.

For the Clippers, the gameplan starts, but certainly does not end, with leading MVP candidate James Harden, who is averaging 28.8 points per game and a career-high 11.3 assists. His more than three 3-pointers per game are also the best in his career.

“They spread the floor, they space the floor and (Harden) attacks,” Rivers said. “He’s probably the toughest cover in the league one-on-one, so he clearly draws in help, and when he does, give him credit, he makes the right pass at the right time.”

It’s been a dramatic development for both Harden and the Rockets.

Houston (42-19) leads the NBA in 3-pointers made and 3s attempted, are second in points per game and assists and, oh, by the way the Rockets occupy the third seed the Clippers (36-23) are still ostensibly chasing in the playoff hunt.

Blowout losses last week to the conference leading Warriors and Spurs did not help the Clippers argument that they are ready to contend. At full strength, finally, they would like to see that change.

“I don’t think we would have rewrote any story had we beat them,” Paul said. “They (weren’t) going to crown us then. I don’t think it’s over for us now.”

Guarding Harden, Rivers said, will be a collective effort, as it always is against elite players. Paul, J.J. Redick, Austin Rivers and Luc Mbah a Moute “are the four main guys” who will take turns on Harden, Doc Rivers said.

“We’ve learned with Harden, there’s not one guy that’s going to guard him for a whole game,” Doc Rivers said. “I just think it’s impossible.”

The Clippers historically have been able to slow Harden, although Paul said he is not “a believer in all that ‘what’s happening in the past’ stuff.’”

“Especially,” he said, “when you’re talking about great players.”

Speaking of great players, Paul’s presence should at least cause some headaches for the Rockets and coach Mike D’Antoni.

On Sunday, in his second game back on the court since tearing a ligament in his thumb, Paul shot just 4-of-18 from the field but managed 15 points to go with 17 assists and 9 rebounds.

“I feel good,” he said, “every game is different. I’m just happy to be back on the court.”