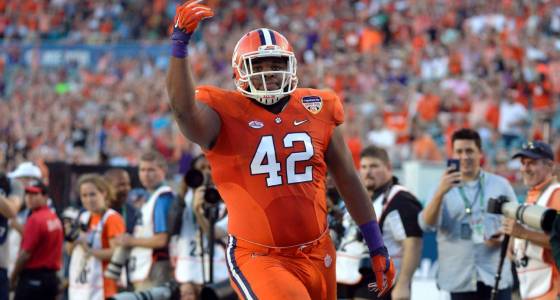 Defending national champion Clemson opens spring practice today, less than two months removed from its celebration in Tampa, Florida. But as Dabo Swinney’s crew gets set to kick off 2017 preparations, things certainly are starting to feel well removed from 2016.

The differences obviously begin at quarterback, where Deshaun Watson moves on to the NFL and a whole host of alternatives with little experience, but a lot of talent, begin battling for the job of replacing a once-in-a-generation Clemson player.

That story will dominate the spring, to be sure. But after the QB battle, there are still some incredibly interesting storylines for the Tigers. Here’s a look at three we’re watching closely.

Where does Christian Wilkins fit?

Ideally, Wilkins is an interior lineman. He looked terrific there as a freshman. He dropped weight last season in an effort to play on the edge due to limitations on the depth chart, and he looked terrific in that role, too. So where does Wilkins best fit now? The need, particularly with the departure of Scott Pagano, is probably back inside, but it will be interesting to see how defensive coordinator Brent Venables utilizes Wilkins this spring. With the NFL draft likely a year away, this is the season Wilkins probably needs to set the tone for how he’ll be viewed in the pros.

The crazy thing about last year’s national champs is that, aside from Dexter Lawrence and Sean Pollard, the Tigers didn’t really get significant contributions from anyone else. That’s a bit surprising given that Swinney signed 15 blue-chip recruits. So, what did a year largely on the sidelines do for Trayvon Mullen, Tavien Feaster, Shaq Smith, Xavier Kelly, Diondre Overton, Tre Lamar and others? The progress made will be critical because virtually all of them will be in the mix for dramatically bigger roles in 2017.

Sure, losing Watson’s arm and leadership is big, but what about his scrambling ability? And how will Clemson replace the physical running style of Wayne Gallman? Swinney’s already made it clear he expects freshman Travis Etienne to play this year, but he won’t be on campus until the summer. That leaves Feaster, Adam Choice and C.J. Fuller in the mix this spring, with the offense needing to get a good look at how physical the trio can perform, while at the same time playing it safe to preserve depth.