LOS ANGELES – The ball bounced on the rim, looked like it might fall through, then fell off.Chris Paul grimaced as the clock ticked to zero. His chance to win the game was lost; the game was going to overtime.Once there, he sealed the victory with his... 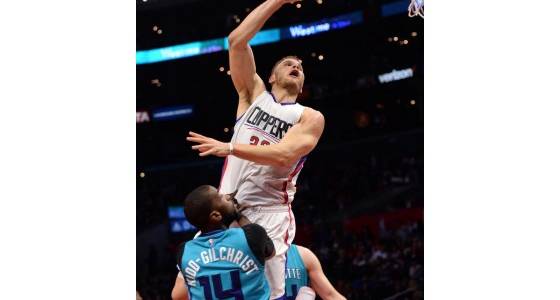 LOS ANGELES – The ball bounced on the rim, looked like it might fall through, then fell off.

Chris Paul grimaced as the clock ticked to zero. His chance to win the game was lost; the game was going to overtime.

Once there, he sealed the victory with his defense.

“When we came to that last timeout with 20 seconds left,” Blake Griffin said, “you could kind of see it in our guys’ eyes, that we weren’t going to let them score.”

With the Clippers nursing a one-point lead with 10 seconds remaining, Paul hounded Charlotte All-Star Kemba Walker into throwing the ball away. DeAndre Jordan grabbed the ball and passed ahead to Paul who drove to the basket and…

Jordan followed it up with a dunk and the Clippers escaped with a 124-121 win against the Hornets, their first in three games since the All-Star break.

Walked protested that he had been fouled, and was about to stumble back over mid-court before tossing the ball away.

“We came up with it,” said Clippers assistant coach Mike Woodson, who addressed the media because Doc Rivers felt ill after the game. “It was a big defensive effort down the stretch.”

It had been a disjointed and frustrating night for the Clippers, with whom no lead was safe. A 17-point advantage in the third quarter was quickly erased. A five-point lead in the last minute of regulation was short-lived.

A loss would have negated some jaw-dropping individual performances from the Clippers, who have had rare occasion this season when each member of their “big three” delivered on the same night.

Blake Griffin scored a season-high 43 points, continuing his run of strong play since returning from injury late in January.

“It’s a cliché,” J.J. Redick said, “but he has played like he’s on a mission. I don’t know what mission that is but he’s been dominant. This is as good as I’ve seen him play.”

Added Paul: “He’s just super-duper aggressive, which we like.”

Paul overcame a dreadful 4-of-18 shooting night to finish with 15 points, 17 assists and 9 rebounds.

No Clippers starter played fewer than 35 minutes, with Griffin and DeAndre Jordan, who finished with 20 points and 19 rebounds, logging 43 apiece.

“We needed all the starters’ minutes tonight,” Woodson said. “Our bench struggled a little throughout the game. Our starters were able to get it done. Doc had to play them a lot of minutes to make things happen.”

The Clippers are in their second game reunited since Paul returned from injury. Six players combined for 17 points, and no reserve scored more than 5 points.

In the end it was easy to forget how close the up-and-down Clippers came to losing.

After a Kemba Walker three and a pair of free throws from the All-Star guard, the game was headed for overtime.

Of course it was.

An eight-point lead at the end of the first quarter? Charlotte answered with a 13-0 run at the start of the second.

The Clippers responded to seize a 59-51 edge at halftime. They quickly more than doubled it, scoring nine straight to open the third quarter. However, with that 68-51 lead in hand, things began to fall apart.

When DeAndre Jordan dove to the basket for a dunk with 4:53 left in the third quarter, it stopped the bleeding on the sort of run the Clippers are often guilty of committing. The Hornets had stormed back to tie the game at 69, an 18-1 run that spanned more than five minutes of the game as the Clippers missed seven straight shots.

They weren’t immune from those struggles even in overtime. The Clippers led 120-116 with 1:19 left in the period, only to allow the Hornets to tie it at 120.

After Griffin split free throws, the Hornets had the ball with 20 seconds left and seemingly the inside track to steal a victory and perpetuate the Clippers struggles.

That was when Paul stepped up.

He didn’t make the game winner, but he made the game-winning play.