It was a slow trickle into the postgame interview room after the Clippers lost, 105-97, to the San Antonio Spurs on Friday night at Staples Center.And even when Clippers Coach Doc Rivers showed up about 25 minutes after the game and Chris Paul about 40 minutes... 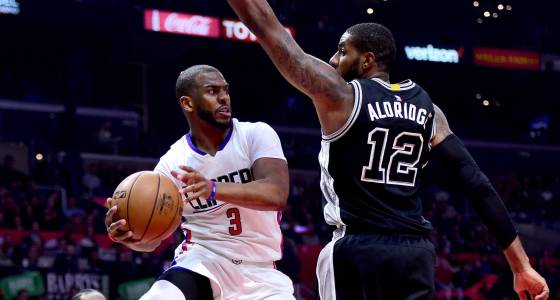 It was a slow trickle into the postgame interview room after the Clippers lost, 105-97, to the San Antonio Spurs on Friday night at Staples Center.

And even when Clippers Coach Doc Rivers showed up about 25 minutes after the game and Chris Paul about 40 minutes after their second consecutive defeat, their monotones were low and not reassuring about a team with championship aspirations.

Paul was back in the Clippers’ starting lineup, his return finally making them whole for the first time in just over two months, his presence sorely needed as L.A. enters the stretch drive of the regular season.

He had come from having been sidelined for 14 games recovering from surgery to repair a ligament tear in his left thumb to a game that was a defensive standoff.

Paul, who was out five weeks after his procedure, had 17 points, five assists and six rebounds in 33 minutes. He wore a small wrap around the thumb for protection, but the All-Star still made six of 14 shots, including two of three from three-point range.

“The only thing that mattered is how we did as a team,” Paul said. “I came out unscathed, which was great. It felt great to be back on the court. A tough loss, but it felt good to get through the entire game.”

Blake Griffin was hit in the face by Spurs reserve Dewyane Dedmon. Griffin, who went down on the court bleeding, went to locker room for a moment and came back out with a band-aid beneath his right eye.

Austin Rivers had another strong game for the Clippers, scoring 23 points. DeAndre Jordan had 14 points and eight rebounds.

But that wasn’t enough to stop the Spurs, who now trail the season series against the Clippers, 2-1.

“We played on one side of the floor for most of the night tonight,” Doc Rivers said. “[Our offense] was tough to watch because you could see us out of rhythm, out of sync.”

The Spurs kept control of the game in the fourth quarter, opening a 13-point lead at one point. Leonard, Parker and Gasol made sure the Clippers never got close enough in the fourth.

Times had been tough for the Clippers with Paul out. They went 6-8 while he recovered.