KANSAS CITY, Mo. – The parade of offensive linemen drafted by the Kansas City Chiefs and headed out of town four years later, when the contracts have expired, is officially over.The Chiefs started to sink money into their own offensive linemen last... 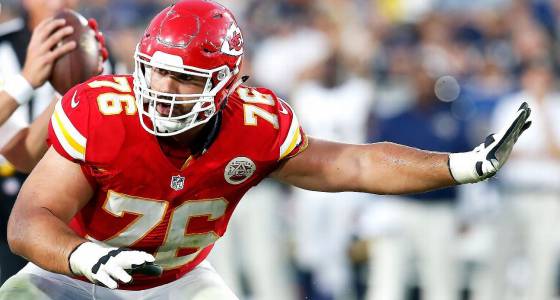 KANSAS CITY, Mo. – The parade of offensive linemen drafted by the Kansas City Chiefs and headed out of town four years later, when the contracts have expired, is officially over.

The Chiefs started to sink money into their own offensive linemen last summer, when they signed left tackle Eric Fisher to an extension that will keep him in Kansas City for the long term.

It’s officially a trend now that the Chiefs are close to an agreement on a five-year extension worth about $41 million for right guard Laurent Duvernay-Tardif.

Including last year’s free-agent signing of right tackle Mitchell Schwartz from the Cleveland Browns, it’s difficult to overstate how much of a change this is for the Chiefs since their early days with John Dorsey as general manager.

When it came time for those players to get paid big money, they had to leave Kansas City to get it. Dorsey and the Chiefs kept Albert around for one season as the franchise player in 2013 before he left for a lucrative contract with the Miami Dolphins. They tried to re-sign Hudson in 2015 but were outbid by the Oakland Raiders.

They filled in mostly with draft picks playing on their rookie contracts or lower-priced veterans. What the Chiefs collectively paid their linemen in 2014 and 2015 was among the lowest in the league.

That’s changing now. Between Fisher, Schwartz and now Duvernay-Tardif, the Chiefs are no longer among the league’s lowest spenders for their linemen.

It’s also notable that the Chiefs signed Fisher and Duvernay-Tardif before they had to. Each had another season left on his contract when he agreed to an extension.

As a result, the Chiefs can have some much-needed offensive line continuity in 2017. Their starting lineup projects to be the same next season as it was the last. All five except for left guard Zach Fulton are signed at least through 2018 and one of last year’s draft picks, Parker Ehinger, could compete with Fulton for the starting job next season anyway.

Good times look to be ahead for the Chiefs’ offensive line. They suddenly have the money to throw themselves one heck of a party.