KANSAS CITY, Mo. -- Given where the Kansas City Chiefs are at running back right now, they have little to lose by signing any player who could provide them help out of the backfield.If that back rushed for more than 1,200 yards in a season and had some career... 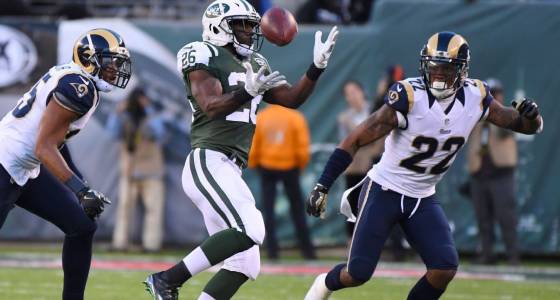 KANSAS CITY, Mo. -- Given where the Kansas City Chiefs are at running back right now, they have little to lose by signing any player who could provide them help out of the backfield.

If that back rushed for more than 1,200 yards in a season and had some career highlights as a receiver, so much the better. That’s why there’s no down side to the Chiefs’ signing of veteran C.J. Spiller.

It’s not wise to expect much from Spiller, 29. He’s five years removed his big 2012 season with the Buffalo Bills, when he ran for 1,244 yards and caught passes for another 459.

Since then, his career has tailed off dramatically. He bounced from Buffalo to New Orleans to Seattle and finally the New York Jets with little to show for it. Spiller last season was with three teams and rushed for a total of 18 yards. He accomplished little for the Saints in 2015.

Judging from that, it’s easy to conclude Spiller has nothing left. That well may be the case. But it’s worth Kansas City’s time to find out.

Spencer Ware got off to a strong start last season but otherwise the Chiefs got little from any of their backs. That’s why they turned to Tyreek Hill for help out of the backfield late in the year.

Jamaal Charles remains a big unknown at this point. Even if the Chiefs retain him, on his existing contract or at a reduced price, there’s no guarantee he will be the same player he once was.

It’s unacceptable for the Chiefs to head into next season with the same backfield situation they had last year. Any kind of consistent production from their backs was one of their biggest offensive problems.

The problem has to be fixed. Maybe it can be fixed with some combination of Charles, Ware and Charcandrick West.

But the Chiefs can’t take that chance. They should bring in yet another back, better done through the draft, and give themselves some options.

As for Spiller, he might not turn out to be one of those options. If not, the Chiefs have lost nothing. But if he does, they’ve gained plenty.