MESA, Ariz. -- Jason Heyward returned to his locker Friday morning and peeled off his batting gloves after an early-morning hitting session.That was even before the Cubs took to the field for their stretching routine and the regularly scheduled workout.Heyward... 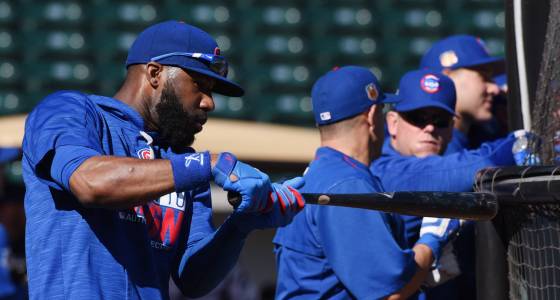 MESA, Ariz. -- Jason Heyward returned to his locker Friday morning and peeled off his batting gloves after an early-morning hitting session.

That was even before the Cubs took to the field for their stretching routine and the regularly scheduled workout.

Heyward is looking to bounce back from a tough year at the plate, and since so much about hitting deals with "feel," as much as mechanics, I had a chance to ask him how the swing is feeling.

"It feels good," he said. "I don't have to think, just be able to make adjustments on the fly as you want to do every day, next pitch, whatever. You just want to find some consistency and some stability in it."

Everybody knows the story. Heyward signed an eight-year, $184 million contract with the Cubs in December 2015. The Cubs wanted the whole package: Heyward's hitting, his Gold Glove defense and his leadership.

So in the off-season, Heyward went to work with Cubs batting coach John Mallee and assistant Eric Hinske to recapture the form of 2012, when Heyward went .269/.335/.479 with 27 homers and 82 RBI for the Atlanta Braves.

"You just start somewhere," he said earlier in spring training. "It's sounds funny, but you just start somewhere. As far as what I was looking at going into the off-season what Coach Mallee and (Hinske) were looking at was 2012, as far as just the mechanics and the freedom that I had and how I was tension-free, relaxed at the plate, and I did a good job of getting myself in position to hit.

"That's the name of hitting, being in a good position to hit. Give yourself an opportunity. Give yourself some air. That's all we worked on, just being in a good position to hit, being tension-free, relaxed up there, find some comfort in that and go for there. There's no perfect swing. You're going to have to fight off pitches. When the pitcher makes their pitch, they make their pitch. It's just about giving yourself an opportunity to hit and do some damage."

If there's one thing Heyward has going for him, it's his work ethic.

"I enjoy working," he said. "I enjoy practice. I love practice. If there's anything I notice about myself growing up different than some other people, it was just I love to practice more than anyone. That's always been me. People ask, 'Oh, did you take a break or whatever?' Yeah, I had a normal off-season as far as that goes. Just work hard, work smart, like anybody else."

What impressed the Cubs was that Heyward never took his performance at the plate out into right field with him, as evidenced by a fourth Gold Glove. And of course, his speech during the rain delay in Cleveland during Game 7 of the World Series is now the stuff of legend.

"That's what I was talking about all last year," Maddon said. "Everybody's focused on his batting average, and know that's how our game is played. But if you have the privilege of being with him in the clubhouse and in the dugout, I get something entirely different: baserunning, defense, throwing ability, accuracy.

"And just as a teammate, I've talked about this before and you've all seen it when they come off the field from the outfield, they'll gather in front of the dugout (and do) the little high-five with the gloves with each other. Love it. That's the kind of stuff that can really build positive momentum."

As I wrapped up my own talk with Heyward Friday morning, I asked if he is living proof that anyone can improve.

"Am I living proof? Everybody's living proof," he said. "That's the game of baseball. That's sports. Especially this game, I've heard it from Hall of Famers. I've heard if from guys in their first year: You can never stop learning if you're hungry and eager to learn. There's always something to learn in this game, which makes it fun."