On a night where the Charlotte men’s basketball team honored its seniors and its lone Final Four team, it couldn’t close the ceremonies with a victory.After leading by as many 13 points in the second half, the 49ers couldn’t muster enough offense in... 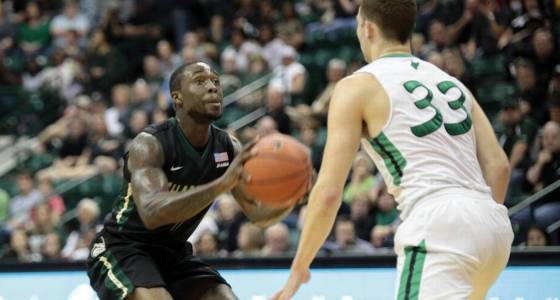 On a night where the Charlotte men’s basketball team honored its seniors and its lone Final Four team, it couldn’t close the ceremonies with a victory.

After leading by as many 13 points in the second half, the 49ers couldn’t muster enough offense in the closing minutes and ultimately lost to Marshall 93-89 in its final home game of the season.

The Thundering Herd responded with a 13-1 run to pull within a point. The 49ers, however, didn’t surrender their lead until about 10 minutes remained.

Charlotte clawed back to tie the game at 76, but that’s as close as it got. Marshall held the 49ers without a field goal for a stretch lasting more than five minutes and ultimately sealed the win by going 7-for-8 at the free-throw line in the final minute, 13 seconds.

Stevie Browning, Marshall: He led all players with 27 points and finished 9-for-13 from the field, including 5-for-6 on 3-pointers.

Ajdin Penava, Marshall: He played a crucial role in the Thundering Herd’s second-half comeback, scoring 12 of his 14 points.

▪  Charlotte honored the 1977 Final Four team during a special halftime ceremony. Seven members of that team, including forward/center Cedric Maxwell and coach Lee Rose, were in attendance.

▪  The highlight of the halftime ceremony included a special tribute to Rose, who posted a 72-18 record during his three-year tenure as the 49ers’ coach. Charlotte raised a banner in the rafters, adjacent to coach Jeff Mullins’ banner and eight retired numbers, in his honor.

▪  Sophomore guard Andrien White scored 14 points in the first half, but he was held to just two in the second.

▪  The 49ers honored seniors Reid Aube and Vanhook as well as redshirt senior Braxton Ogbueze before the game, their final one at Halton Arena. All three started the game.

▪  The 49ers conclude the regular season with a pair of road games, at Texas-San Antonio on Thursday and at Texas-El Paso on Saturday.

“It’s just amazing. It’s well-deserved and couldn’t have happened to a better guy. I talked to him, and we laughed. We made some great decisions being around him, and they made a great decision with this happening.” – Maxwell on Rose being honored.