The first 40 games as an NHL rookie are kind of a breeze. At least that's the way Columbus Blue Jackets defenseman Seth Jones describes it.The thrill of fulfilling a lifelong dream gets you through the first portion of the schedule. You're just excited... 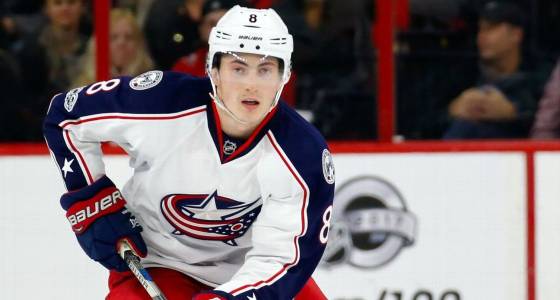 The first 40 games as an NHL rookie are kind of a breeze. At least that's the way Columbus Blue Jackets defenseman Seth Jones describes it.

The thrill of fulfilling a lifelong dream gets you through the first portion of the schedule. You're just excited to be there. One night you're facing Sidney Crosby on the opposing team. The next night it's Jaromir Jagr. It's hard not to get fired up for that.

"You're playing off adrenaline," Jones said.

Then, about halfway through the season, it gets harder. Hey, it's Crosby again. Uh oh. And how does this other team know all my tendencies already?

It certainly did for Jones' teammate and defensive partner, Zach Werenski.

As Werenski progressed through the U.S. development team program and the University of Michigan, his seasons would wind down after 30 or so games. Last season, playing for both Michigan and the AHL's Lake Erie Monsters during their playoff run, Werenski took part in a combined 60 games. It was a nice buildup for the next level.

But it was nothing like what he is experiencing now as a rookie.

Werenski will have played 60 games shortly after the Blue Jackets return from their bye week. Then there's the playoffs, a spot in which the Blue Jackets -- who have 79 points heading into their five-day break -- have all but secured.

Earlier this season, Werenski joked that he might have to pick up a hobby because of all the extra time off the ice that being a professional afforded him. He's living with teammate Josh Anderson this season and spent a lot of time hanging out at the mall or playing Xbox, about what you'd expect from a 19-year-old.

"Now it's to the point where [once] practice is over, you want to lay in bed," Werenski said. "It's such a long year. You want to get your rest and feel good for the next game. Now I have no problem doing nothing."

At times, especially earlier this month, it looked as though Werenski might be slowing down after a hot start to his NHL career. He was taken off Columbus' first power-play unit to help shift focus to his defense and his play without the puck. He went his longest stretch without registering a point -- six games -- to start February.

With a tough veteran such as John Tortorella as his first NHL coach, the teenage defenseman could have been forgiven if he were afraid to speak up and went into a bit of a shell. It has taken veterans more than a season to feel comfortable going to Tortorella with issues.

When the offense started to dry up, he approached Tortorella with a solution.

"He said, 'Sometimes I don't get enough touches and I'm not in the game,'" Tortorella said. "That's what's cool about him. That's what's really neat about him."

When Werenski's comment to Tortorella about needing touches was relayed to Brown, he laughed.

"I love hearing that," Brown said. "What a great comment. It's not an arrogant comment, it's 'I want to do more.'"

To listen to Brown's philosophy on hockey is to understand how Werenski arrived in the NHL a very modern and mature defenseman.

Brown taught his players not to think in terms of positions like defensemen and forwards. He wanted all five skaters to try to use their brains to create advantages on the ice, to forge triangles around the other team.

One year from now, the Winter Olympics will be on. But will NHL players be playing in them? While that gets sorted out, here's our projected roster for Team USA.

Are they buying or are they selling? Recent strong play and a return to health by the Florida Panthers has presented Dale Tallon with tough choices heading to the March 1 trade deadline.

The top remains the same, but coaching changes have messed with the mix outside of the top five, making for a wild ride of a finish as we head to the trade deadline and down the stretch.

Brown's dad is a math teacher and a football coach, and Brown coached his youth hockey players with that gridiron mindset. The ice is like a football field, he believes, and each player is a quarterback trying to find the first open receiver as quickly as possible.

"I taught the players, 'You are a hockey player. It doesn't matter where you are lined up on the faceoff. Play the game. Use the goalie if you need to. Pass the puck and change positions. If you see an intelligent reason to head up ice, head up ice,'" Brown said. "I kept very few rules."

During his time in Detroit, Scotty Bowman was a very strong influence on Brown. There are also shades of the Red Wings' Russian Five in Brown's philosophy.

"[Thanks to] Scotty Bowman and the Russian Five, we got our PhD in understanding and creating more opportunities," Brown said. "Other sports -- like soccer, lacrosse and hockey -- teach you to create 2-on-1s. ... Go way back to the 1980 Olympic team; we saw how great the Russians were. That was the beginning."

Werenski was raised to think about the game. And he had the intellect to grasp it all at a young age.

"It's the brain, not the body," Brown said. "It's the brain creating time and space by moving to create 2-on-1s. He does the analytics. The brain is a muscle, and he pushes it hard to keep learning."

Teams have adjusted to Werenski -- "He's a marked man," Blue Jackets GM Jarmo Kekalainen said -- but he is adjusting in return. He's confident enough to communicate with his coach about fine-tuning things even more.

After starting the month with that pointless streak, Werenski has had five points in his past last three games. He scored a goal and had two assists against the Nashville Predators on Sunday to give him nine goals and 36 points on the season.

The Florida Panthers' Aaron Ekblad was the last rookie defenseman to win the Calder Trophy. He had 12 goals to go with 39 points in 2014-15. Werenski is on track to blow past those numbers.

He just happens to be playing in a rookie class that also includes Auston Matthews and Patrik Laine, making Werenski a Calder dark horse. He has entered the NHL a bit like Tom Brady did the NFL -- as an unheralded, overshadowed University of Michigan kid who is using his intellect to find open receivers time after time.

Quietly, the numbers are starting to add up.