CaptionCloseTorontoDeMar DeRozan scored a career-high 43 points and the Toronto Raptors rallied from a 17-point deficit to beat the Boston Celtics 107-97 on Friday.DeRozan shot 15 of 28 from the floor as he surpassed his 42-point effort against the Houston... 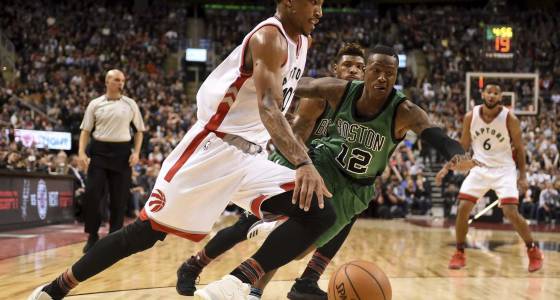 DeMar DeRozan scored a career-high 43 points and the Toronto Raptors rallied from a 17-point deficit to beat the Boston Celtics 107-97 on Friday.

DeRozan shot 15 of 28 from the floor as he surpassed his 42-point effort against the Houston Rockets on March 30, 2015, helping the Raptors overcome the absence of fellow All-Star Kyle Lowry. Lowry sat out with a right wrist injury.

Serge Ibaka, acquired by trade from the Orlando Magic last week, scored 15 points in his debut, while fellow newcomer P.J. Tucker, picked up from the Phoenix Suns on Thursday, had a game-high 10 rebounds and nine points in his first game for his new team.

Isaiah Thomas scored 20 points for Boston, which also got 19 points each from Jae Crowder and Marcus Smart.

Boston pushed its lead to 17 on a 3-point shot from Jaylen Brown with 1:29 left in the half.

76ers 120, Wizards 112: Robert Covington had 25 points and 11 rebounds, Dario Saric added 20 points and 11 boards, and depleted Philadelphia beat Washington. Bradley Beal had 40 points and John Wall scored 29 for the Southeast Division-leading Wizards. On a day the Sixers announced No. 1 overall pick Ben Simmons will not play this season, their other young players stepped up to make up for the absence of star center Joel Embiid and the trades of center Nerlens Noel and forward Ersan Ilyasova. Noel and Ilyasova were dealt before Thursday's trade deadline and Embiid (left knee) missed his 12th straight game.

Pacers 102, Grizzlies 92: CJ Miles made five 3-pointers and scored 17 points, and Paul George had nine points and nine rebounds after staying in Indiana following the trade deadline, as the Pacers snapped a six-game skid.

Timberwolves 97, Mavericks 84: Karl-Anthony Towns had 26 points and 18 rebounds and Andrew Wiggins scored 27 points to help Minnesota. Ricky Rubio added 13 points and 14 assists a day after the Timberwolves declined an opportunity to trade him to the New York Knicks for Derrick Rose. The Wolves shot 52.6 percent to pull within 21/2 games of Denver for the eighth seed in the Western Conference.

Thunder 110, Lakers 93: Russell Westbrook scored 17 points in his 28th triple-double of the season, and his new teammates fit in seamlessly as Oklahoma City defeated Los Angeles. Westbrook also had 18 rebounds and 17 assists for the 65th triple-double of his career. It was the first game for new Thunder players Taj Gibson and Doug McDermott, acquired Thursday in a trade with the Chicago Bulls. Gibson scored 12 points and McDermott added eight, even though they arrived Thursday night and weren't even available for the shootaround on Friday.

Bulls 128, Suns 121 (OT): Dwyane Wade scored 23 points, Jimmy Butler added 22 and Chicago rallied from 11 down in the fourth. Devin Booker scored 27 points for Phoenix, but missed a chance to win it in regulation after Wade fouled him on a 3-pointer with 1.5 seconds left. Booker hit the first two free throws to tie it, then missed the third.