Matt Wieters said he managed to cut his left wrist severely by breaking a five-gallon glass water container in his garage on Nov. 1, delaying his offseason preparation — and, he thinks, his chance to find a deal in free agency.“It’s tough... 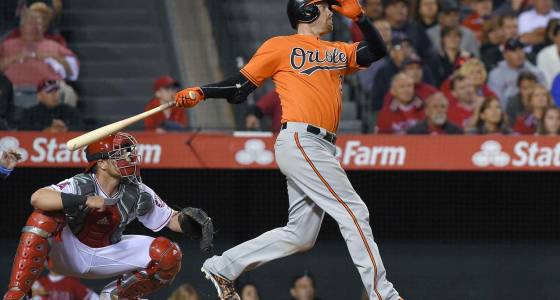 Matt Wieters said he managed to cut his left wrist severely by breaking a five-gallon glass water container in his garage on Nov. 1, delaying his offseason preparation — and, he thinks, his chance to find a deal in free agency.

“It’s tough finding a team when you can’t do anything baseball-related,” Wieters said Friday, when the catcher took batting practice and ran conditioning sprints at spring training in West Palm Beach, Florida with the Washington Nationals after his signing was announced. “They told me I was very lucky that it wasn’t worse than it was.”

The 6-foot-5, 230-pound Wieters agreed to a $21 million, two-year deal worth $10.5 million annually, one that gives him the right to terminate the agreement after this season and become a free agent again.

Now the obstacle for Wieters is getting up to speed with the reigning NL East champions’ pitching staff.

“There’s definitely enough time,” Wieters said. “As a catcher, I’d love to have as much as possible. Being able to listen (to the pitchers) and how they pitch will help me out a lot.”

He joins a crowded clubhouse of catchers. Jose Lobaton and Pedro Severino played in Washington last season, and the club traded for San Diego’s Derek Norris. In all, there are six catchers on the 40-man roster.

General manager Mike Rizzo described Wieters as “a leader in the clubhouse and on the field” for the Baltimore Orioles, the only major league club the four-time All-Star has played for until now.

“It’s a unique thing to find someone who can be a switch-hitter at such a premium position and be so consistent on both sides,” second baseman Daniel Murphy said. “Lengthens out our lineup. That’s a really tough matchup problem.”

Wieters played with Max Scherzer on the 2005 U.S. national baseball team when both were in college.

Former NFL and Georgia defensive back Sanders Commings is looking to play another sport.

The 26-year-old Commings has agreed to a minor-league deal with the Atlanta Braves.

An outfielder who hasn’t played baseball since high school in Augusta, Georgia, Commings faces long odds to become one of the rare players to make it to both the NFL and Major League Baseball.

He was drafted out of high school by the Arizona Diamondbacks but chose to play college football at Georgia.

Commings was a fifth-round pick by Kansas City in the 2013 NFL draft. He was released after two injury plagued seasons with the Chiefs and turned his attention to baseball.

The Chicago Cubs and reliever Pedro Strop have agreed to a two-year contract that includes a club option for 2019.

The deal supersedes a $5.5 million, one-year agreement from earlier this month.

Strop went 2-2 with a 2.85 ERA in 54 appearances last year, helping Chicago win the World Series for the first time since 1908. Strop and ace right-hander Jake Arrieta were acquired in the same July 2013 trade with Baltimore.