Arizona Coyotes center Martin Hanzal, a pending unrestricted free agent, could potentially be dealt before the end of the weekend as Coyotes GM John Chayka dials in on the ramped-up offers he has received.Arizona is down to a handful of teams from the list... 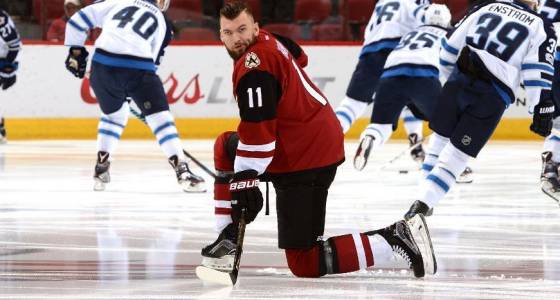 Arizona Coyotes center Martin Hanzal, a pending unrestricted free agent, could potentially be dealt before the end of the weekend as Coyotes GM John Chayka dials in on the ramped-up offers he has received.

Arizona is down to a handful of teams from the list of 10 potential trade partners it had two weeks ago. It's always hard to pinpoint the timing on these things because teams sometimes extend the window by improving their offers in a desperate attempt to stay in the chase, but I think Chayka feels he can get this done in a matter of days.

The Montreal Canadiens remain in the mix, while the Ottawa Senators have recently inquired, as did the Nashville Predators. But name any contender and it's likely they have checked in on Hanzal. As I've said all season long, the slumping Canadiens make so much sense as a destination for Hanzal, whose 6-foot-6 frame and shutdown talents are things the Habs need down the middle. But I also believed Canadiens GM Marc Bergevin when he said at coach Claude Julien's news conference last week that he won't overpay for a short fix.

Then again, considering how hapless the Habs looked in a 3-0 loss at home to the New York Islanders on Thursday night, Bergevin is under the gun to make a move to help his team salvage its season.

The Edmonton Oilers don't plan on doing anything too sexy ahead of the deadline. They're excited about potentially being playoff-bound but I don't think GM Peter Chiarelli feels it's the right time to start doling out a first-round pick or a top prospect for a big-name rental. Instead, look for him to try to add a bottom-six center or winger. Pending UFA center Brian Boyle of the Tampa Bay Lightning would be a good fit, but only at the right price. The Oilers don't have a 2016 second-round pick. Pending UFA center John Mitchell of the Colorado Avalanche would be another option, among several, for the Oilers. Editor's Picks

One of the NHL's top trade candidates may not be moved prior to the deadline, and here's why. Plus, your mailbag questions answered.

Who are the best players believed to be available at the NHL trade deadline? Here's our list of the top 20, led by Avalanche center Matt Duchene.

The Lightning are within striking distance of the playoffs, so GM Steve Yzerman might keep Brian Boyle and Ben Bishop. Plus, Detroit isn't shopping Mike Green (yet) and more trade deadline scoop.

The Minnesota Wild are on the lookout for a bottom-six forward with some experience ahead of the deadline. But the Wild are also focused on getting more depth as they face a compressed stretch to end their regular season, including 16 games in March. Potential targets who would make sense: Boyle, Jannik Hansen (Vancouver Canucks) and Patrick Eaves (Dallas Stars), among others.

I don't think Eaves will still be a Star come Wednesday. As mentioned before, his $1 million cap hit has made him a very popular target for cap-challenged contenders. The Stars have gotten more calls about him than about any other player. He will move before the deadline.

Senators GM Pierre Dorion has had his cellphone stuck to his ear over the past week gauging the market for a top-nine forward. Injuries up front have added to the urgency, but I believe that even if the Senators were fully healthy this is the area where Ottawa was going to try to upgrade before the deadline.

This is subject to change of course, but I think the Chicago Blackhawks are focused on a depth move, nothing flashy. They are determined to keep their first-round draft pick, maybe even their second-round pick -- and the top young players they already have.