Richard Foley of Montreal, the first Canadian to qualify for the Daytona 500, was on the phone from Florida talking about D.J. Kennington of St. Thomas, who is about to become the eighth.“Tell him to keep his RPMs up, to ride high in the turns and... 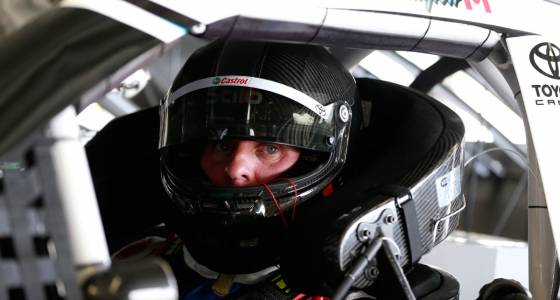 Richard Foley of Montreal, the first Canadian to qualify for the Daytona 500, was on the phone from Florida talking about D.J. Kennington of St. Thomas, who is about to become the eighth.

“Tell him to keep his RPMs up, to ride high in the turns and do his passing on the straights,” said Foley, soon to be 85, who raced on the sands of Daytona Beach before Bill France Sr. opened the 2.5-mile Daytona International Speedway oval in 1959 and promoted the first 500.

“Above all,” Foley added, “remind him he’s carrying the torch that’s been passed to him by seven great Canadian racers who came before him. We are looking to him to make us proud.”

Kennington, a two-time NASCAR Canada Pinty’s Series champion, earned his place in what’s known as the Great American Race on Thursday night when he finished 15th in his No. 96 blue-on-white Toyota in one of two qualifying races to set the field for Sunday’s 58th running of the Super Bowl of stock-car racing.

And when he takes the green flag in the 28th starting position surrounded by American racing royalty — Dale Earnhardt Jr. is on the front row, with eight-time series champion Jimmie Johnson just ahead of Kennington and Martin Truex Jr. right behind — not only will he become just the eighth Canadian to drive in the race, he’ll be the first in 29 years.

For the 39-year-old from southwestern Ontario, who’s been racing stock cars since he was 16, it’s a dream come true.

“It’s simply unbelievable,” he said in a telephone interview. “We came down here — I brought the guys that help me on the Pinty’s team — with the idea of trying to qualify. Now that we’ve done it, and we’re in the Daytona 500, it’s almost surreal.”

Kennington wasn’t fast enough in time trials last Sunday to qualify on speed. That meant he had to “race his way in” during his 125-mile qualifier. Kennington — who saw his first Daytona 500 on TV when he was 4 years old — had to finish in front of driver Elliott Sadler, which he did by less than a car length at nearly 200 miles an hour.

There were tears on his face as he climbed from his car, where he was met by TV cameras and reporters. His first words? “This is the greatest moment of my life.”

Not only that, but he’s driving for a Canadian-owned team, Gaunt Brothers Racing (owner Marty Gaunt is from Barrie), and his two primary sponsors are Wakefield-Castrol Ltd. of Ontario and B.C.-based Lordco Auto Parts.

“Can you imagine it?” Kennington said. “Castrol has sponsored me for 25 years. They’ve always had my back. They’re like family to me.”

By making the 40-car field, Kennington will start just the second major NASCAR race of his life, the first coming at Phoenix last fall where he finished 35th. A veteran of NASCAR minor-league Xfinity Series races and some Camping World Series truck events, most of his success has come in the Pinty’s series, where he’s won 26 races and made 204 consecutive starts. This will be his toughest test to date.

“Anybody can win this race,” he said. “It’s 500 miles, but the hard part’s done. Now, we‘ll just let things ride and see where we wind up. We’ll make adjustments all through the race to try to stay on pace and we’ll play it safe — maybe even be a little cautious — so we can be there at the end.”

Compared to other series in North America, there isn’t a lot of money for car racing in Canada and Kennington is grateful for the support he’s received.

“I can’t count the number of people who helped me over the years,” he said. “People who came to the garage to help me out, who helped out at the tracks, the fans — all of them had a hand in me being here. My dad (Doug Kennington, a drag racer and engine builder who’s in the Canadian Motorsport Hall of Fame) did so much for me, encouraging me all along the way. I’ll be thinking of him and all those other people, too, when I go out to race on Sunday.”

He’ll also be thinking, as Richard Foley put it, of the racers who went to the post before him and two in particular: Vic Parsons of Willowdale and the late Roy Smith of Victoria, B.C., both of whom finished in the top 10.

Others who made the grade but weren’t as successful in the race were Don Biederman of Port Credit, Earl Ross (the Ailsa Craig, Ont., native remains the only Canadian to ever win a Cup race) and Trevor Boys of Calgary, who made his last Daytona start in 1988.

The second Canadian to start the 500, Jim Bray of Brantford (1964-65) is in Daytona and helping Kennington with a small sponsorship. His Jim Bray Trailers logo is on the front quarter panel of the race car.

“It’s not much, just a little bit of money,” Bray said over the phone from Florida. “But it all helps. We’re all Canadians and we have to stick together, you know.”