Can Bud Black break the curse of Coors Field?

SCOTTSDALE, Ariz. -- Bud Black knows all about the demoralizing impact of hostile atmospheric conditions on baseball players. When he arrived in San Diego to manage the Padres in 2007, the outfield fences were deeper, and hitters from Adrian Gonzalez to Brian... 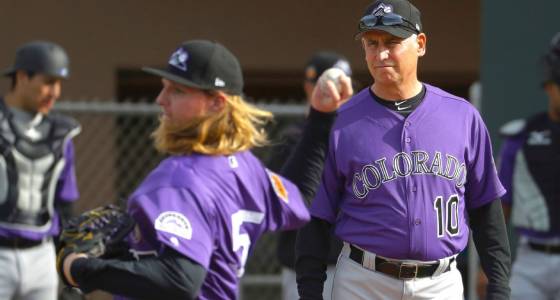 SCOTTSDALE, Ariz. -- Bud Black knows all about the demoralizing impact of hostile atmospheric conditions on baseball players. When he arrived in San Diego to manage the Padres in 2007, the outfield fences were deeper, and hitters from Adrian Gonzalez to Brian Giles had to live with the reality that some well-struck fly balls were going to die at the warning track amid the damp and heavy coastal air.

Follow all the action and news from the Cactus and Grapefruit leagues in Arizona and Florida, respectively.

A decade later, Black isn't about to be cowed by the pitcher-related fatalism that's come to define Coors Field. He has 5,280 reasons to expect glitches in his first year as the Colorado Rockies' manager, but the team motto might as well be, "Altitude, schmaltitude.''

"When I got to San Diego, it was hard to hit and easier to pitch, statistically,'' Black said. "The message there was, 'Hit the ball on the nose. Get your hits. Let's play a good solid game.' Here it's the other way. It's, 'Make good pitches. Don't walk anybody. Be fundamentally sound and let's go beat the other team.' For me it's sort of the opposite of what I dealt with before, which is exciting.''

In their first 24 seasons, the Rockies tried Don Baylor, Jim Leyland, Buddy Bell, Clint Hurdle, Jim Tracy and Walt Weiss in the manager's seat and ranked last or next to last in the National League in ERA 18 times. Now they'll see if a crafty left-hander can solve the Coors Field Rubik's Cube. Black, who won 121 games over 15 big league seasons on the mound, joins Boston's John Farrell and Cincinnati's Bryan Price as the third member of the pitching fraternity who will be making out lineup cards for an MLB club in 2017.

Hiring a respected pitching mind and giving him the raw materials to win games are two different things, and the Rockies enter the new season with perhaps their brightest outlook since 2007-2009, when Troy Tulowitzki and Todd Helton helped the franchise to two 90-win seasons and its only World Series appearance (in '07).

The Rockies have a formidable offense featuring Nolan Arenado, Carlos Gonzalez, 2016 NL batting champion D.J. LeMahieu and the addition of Ian Desmond, who signed for $70 million to play first base. The Rockies have also invested the time and resources to assemble a pitching staff that they hope will give the Los Angeles Dodgers and San Francisco Giants something to worry about in the NL West.

Colorado's fate could ultimately hinge on a young rotation that includes Jon Gray, Chad Bettis, Tyler Chatwood and Tyler Anderson, with rookies Jeff Hoffman and German Marquez among the top candidates for the fifth spot.

As anyone acquainted with Rockies' history can attest, pitching is the emotional anchor around the franchise's collective neck. So the Rockies have tried everything through the years. They signed big-ticket free agents (Mike Hampton and Denny Neagle) and invested money in high draft picks who failed to pan out. They focused on sinkerballers for a while, avoided curveballers, and got innovative in 2012 when they tried a four-man rotation and limited each starter to 75 innings. They even became a home for wayward geezers: In April 2012, 49-year-old Jamie Moyer was pitching for Colorado when he became the oldest major league pitcher to record a victory.

General manager Jeff Bridich, who has been with the organization for 13 seasons and assumed his current role in 2014, laughed when asked if he's learned any lessons through the years that might have allowed him to solve the Coors Field mystery.

"Some of the stuff, I'd have to kill you if I told you,'' Bridich said. A cursory check of Colorado's pitching history shows that success can be fleeting. The best Rockies starters -- Ubaldo Jimenez, Aaron Cook, Jorge De La Rosa, Jhoulys Chacin, Pedro Astacio, Jason Jennings and Jeff Francis -- enjoyed flurries of success but flamed out relatively quickly because of injuries or ineffectiveness.

Against that daunting backdrop, Black and Bridich agree that an aggressive mindset is vital in slaying the Coors Field monster.

"On top of talent, we need mentally tough SOBs,'' Black said. "We have to find and draft guys who are resilient, who'll bounce back from a tough outing where it might get chaotic in Coors and their ERA takes a hit. It might get a little bit unsightly when it pops up on the scoreboard or on TV. We have to have guys who will overlook that individual line -- who truly don't care about that.''

The early signs for the young starters are encouraging. Gray, Bettis and Anderson all logged better numbers at home than on the road last year, and the Rockies posted a 4.70 team ERA after the All-Star break compared to a 5.08 mark before it. And if it's mental toughness Black desires, the kids have overcome enough obstacles to suggest they'll stick with it.

Three of Colorado's top four starting pitchers logged better numbers at Coors Field than on the road in 2016.

Chatwood has survived two Tommy John surgeries. Anderson, a first-round pick out of the University of Oregon in 2011, missed the entire 2015 season with a stress fracture in his left elbow and was 26 when he made his big league debut last summer. And now Bettis is going through an ordeal that would test anyone; he was diagnosed with testicular cancer in November and had one of his testicles surgically removed. This week, Bettis told reporters that his latest blood work has revealed he's cancer-free.

Three years ago, the Rockies were pinning their hopes on Gray and fellow prospect Eddie Butler. While Butler failed to pan out in Denver and moved on to the Cubs organization in a recent trade, Gray went 10-10 with a 4.61 ERA in 2016, struck out 16 Padres in a shutout in September, and assumed the look of a workhorse. He also arrived at spring training looking a little like Noah Syndergaard -- with long, flowing blond hair that spilled below his shoulders. Gray is planning to get his hair cut soon and donate it to a charity called Locks of Love, which provides hairpieces for disadvantaged children suffering hair loss because of medical conditions.

"I'm ready for it to be gone,'' Gray said. "I didn't realize it was so much work until I actually had it.''

Amid the rigors of life at Coors Field, Gray and Bettis talk about the importance of "changing eye levels'' and becoming more visually aware. When throwing a breaking ball in Denver, Rockies pitchers have to train their eyes on a lower spot than they would on the road to ensure that the ball arrives at the same place. While that sounds simple enough, it takes discipline to do it pitch after pitch.

"We need mentally tough SOBs. We have to find and draft guys who are resilient, who'll bounce back from a tough outing where it might get chaotic in Coors and their ERA takes a hit. It might get a little bit unsightly when it pops up on the scoreboard or on TV."

"That's something we learned in the second half,'' Bettis said. "Pitches move a little different, and you have to make those adjustments faster than three innings into a game. If you don't, you'll find yourself out of a game real fast.''

Black and Padres pitching coach Darren Balsley earned raves for turning around pitchers at Petco Park. In Denver, Black will continue to rely on a collaborative effort with pitching coach Steve Foster, who stresses the mental side of the game, and bullpen coach Darren Holmes, the team's resident authority on pitching mechanics.

Rather than dance around the topic of Coors Field and its reputation as a self-esteem killer for pitchers, the Rockies are ready to stare down their organizational demons from a distance of 60 feet, six inches.

"It's no longer the elephant in the room,'' Bridich said. "We don't dwell on it, but we address it openly -- this misnomer that success can't be had at altitude from a pitcher's perspective. We're 25 years old now as an organization, and there are all different types of pitchers who've had success. A lot of it has to do with mental makeup and the belief guys have in themselves and each other. And some of it is about weeding out the noise.''

When things get too loud, chaotic or just plain crazy at Coors this summer, Colorado's pitchers can count on Bud Black's calming voice gently guiding them back to earth. He's ready to bring the perspective and the encouragement. All they have to do is make the pitches.