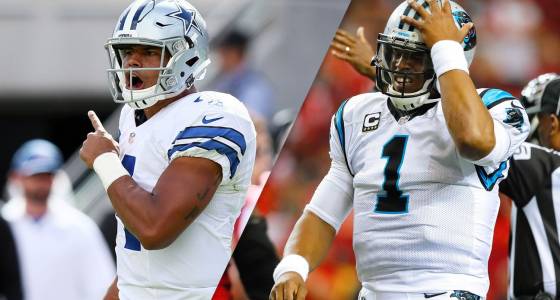 CHARLOTTE, N.C. -- Not ready to be an NFL starter. Bad footwork. Off-the-field issue.

Both went on to win NFL Offensive Rookie of the Year honors; Newton in 2011 and Prescott this past season.

Newton, the first overall pick in 2011 out of Auburn, threw for 21 touchdowns and rushed for 14 more. Prescott, a fourth-round pick out of Mississippi State, had 26 touchdown passes and six rushing scores.

Prescott had better team success as the Cowboys went 13-3 and made the playoffs in his rookie season. The Panthers were 6-10 in Newton's first season and didn't make the playoffs with the 2010 Heisman Trophy winner until his third year.

But both players quickly established themselves as the organization's franchise quarterback despite what was said about them at the combine.

With the 2017 combine set to begin next week in Indianapolis, let's look back at how Newton and Prescott compared:

Newton obviously was the more athletic of the two. Neither scored great on the Wonderlic, a cognitive ability test the NFL uses to assess aptitude.

Not that you can put too much stock in that. Pittsburgh Steelers quarterback Ben Roethlisberger scored a 25, and he went on to become a five-time Pro Bowl selection and two-time Super Bowl champion.

Here's what the NFL.com analysis said about Newton and Prescott after the combine:

Newton: "Has a rare blend of height, strength and speed. Fierce competitor and emotional leader. Flashes the ability to zip the ball into tight spots. Has a quick, over-the-top delivery. Puts a ton of revolutions on the ball and can make all the throws. Frequently evades the rush for second-chance opportunities. Threat to pick up large chunks when he tucks."

Prescott: "Thick, muscular frame. Has proven over the last three seasons that he can withstand a pounding. Has enough natural arm strength and hip snap to fit throws into an NFL window. Stands tall and delivers a tight spiral with the over-the-top delivery. When pocket is clean, can deliver accurate strikes around the field. Played with improved vision and care for football this season and eliminated many of the ill-fated throws that turned into interceptions in 2014. Still a work in progress, but continues to show a level of growth as a passer. ... Willing to extend plays outside of the pocket with legs, but look to finish the play with his arm. Mentally tough enough to carry a heavy offensive burden for the Bulldogs over the last three years."

Newton: "Not proficient at going through his progressions or making NFL reads. Doesn't anticipate receivers getting open, must see them in a window. Inconsistent accuracy due to poor footwork and falling away to avoid a big hit. Despite athleticism, needs to improve his drop mechanics and the finer points of pocket mobility. Numerous off the field issues worth investigating."

Prescott: "Beat up this year thanks to poor protection. When he wasn't being sacked, he was being hit hard. Not as competitive a rusher in 2015. Sacks and usage in run game might be taking a toll. Increase in short pass attempts from 86 to 208 this year reason for higher completion numbers. Accuracy on intermediate and deep throws dropped sharply. Pocket poise has been compromised. Hyper aware of pressure around him and lacks awareness to slide and find a temporary shelter to make throw. Concern over pressure too often trumps ability to get through progressions. Must speed up the pace of his reads. Footwork is a mess. ... Throws to target rather than leading or throwing them open on short/intermediate throws. Too respectful of underneath coverage, and must be more willing to challenge the defense. Needs to improve anticipation."

Both quarterbacks obviously overcame their weaknesses. Newton was the NFL Most Valuable player in 2015 with a career-high 35 touchdown passes to go with 10 rushing TDs.

Prescott was so efficient in 2016 that veteran Cowboys quarterback Tony Romo never got his job back and is expected to be released.

It just goes to show that the combine isn't an exact science.