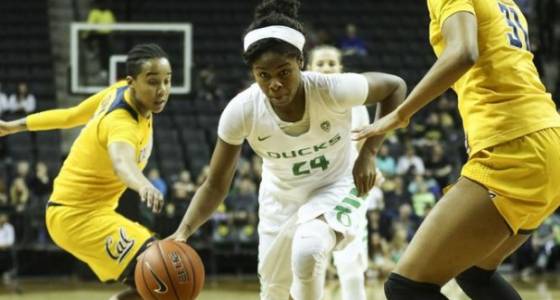 Sierra Campisano's layup tied the game at 49 with 3:36 left, but the Ducks wouldn't score again and missed their last seven shots. Anigwe made a jumper and 1 of 2 free throws and Mi'Cole Cayton made two fouls shots to end the game.

The two teams each scored just six points in the second quarter as Cal shot 2 for 8 and Oregon went 3 for 13.

EUGENE, Ore. -- The Oregon women's basketball team battled back from an early deficit but couldn't complete the comeback, falling 55-49, to Cal on Friday night at Matthew Knight Arena.

HOW IT HAPPENED: Cal started the game red-hot from the field. Guard Asha Thomas went 3-for-3 from three-point range in the opening minutes as the Bears jumped out to a 13-4 lead with 6:13 left in the first quarter. Oregon rallied back, however, and cut the Cal lead to just 17-14 at the end of the first.

Both teams struggled to get anything going in the second quarter. Cal and Oregon each scored six points in the quarter and Bears took a 23-20 lead into halftime.

Oregon cut the Cal lead to just one after a pair of steals by Sabrina Ionescu but the Bears pushed their lead to 42-36 at end the of third quarter.

In the fourth quarter, Oregon tied it up, 44-44, when Ruthy Hebard scored inside. Cal hit a three-point on the other end, butMaite Cazorla buried a three and it was tied again, 47-47, with 4:54 left in the game. The Ducks tied it again, 49-49, on a Sierra Campisano layup with 3:36 remaining but didn't score again as Cal tallied six unanswered points to end the game.

Jacinta Vandenberg on tonight's game: "Obviously this loss hurts. We came out a little flat and then clawed our way back into it and it just came back down to the last couple of minutes. Obviously it hurts, but we have grown enough in these 29, 30 games to not let it affect us the next game."

UP NEXT: Oregon closes out the regular season at 1 PM on Sunday against Stanford. The Ducks' senior day ceremony will take place after the game.