Once your blood pressure drops back to normal, Bulls fans, realize the team not trading Jimmy Butler now to start a necessary rebuild hardly means it won't trade him later.The Bulls deserve your doubt and have earned every ounce of skepticism but reserve... 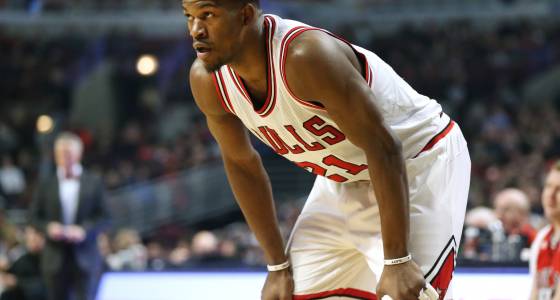 Once your blood pressure drops back to normal, Bulls fans, realize the team not trading Jimmy Butler now to start a necessary rebuild hardly means it won't trade him later.

The Bulls deserve your doubt and have earned every ounce of skepticism but reserve your rancor for June 23, the day after the 2017 NBA draft. If Butler remains a Bull at that point, then feel free to question what in the name of Marquis Teague is going on at the Advocate Center. Until then, understand the Bulls left open the possibility of going young without Butler, a process consistent with trading for 22-year-old point guard Cameron Payne.

Nothing the Bulls did or didn't do before Thursday's NBA trade deadline disqualified them from rebuilding. Nothing Bulls executive vice president John Paxson said in a news conference explaining the trade with the Thunder ruled out dealing Butler at a more appropriate time. Listening closely to Paxson, it sounded as if a potential trade of Butler — the major part of the project — was delayed more than denied. Once the Bulls learn the draft order of the high first-round picks being dangled, it will provide definition currently lacking.

"The important thing for us if we are ever in a position we are going to rebuild, there has to be a certainty in what you're getting back,'' Paxson said. "If you're going to go that route, you better have certainty you can get several young assets that are legitimate. Those kind of things don't exist right now.''

Even Celtics President Danny Ainge told the Boston Globe that some of the trade conversations of the past few days could be revisited this summer, parroting what Paxson meant without saying so. A Bulls team concerned with improving its playoff seed more than planning for the future doesn't make a trade that creates more playing time for its last two first-round draft picks, Denzel Valentine and Bobby Portis. It's hard to imagine Butler and 35-year-old Dwyane Wade, who will ponder his player option in the summer, endorsing the Bulls' Cam Payne plan that makes a youth movement seem imminent regardless of what happens in the next 25 games.

Whether Butler will remain in the middle of any movement by the Bulls was left open for interpretation after Paxson stopped short of assuring it.

"Right now, today, Jimmy is on our roster and under contract for two more years,'' Paxson said. "You guys know, this league is fluid.''

As commitments to franchise players go, file that under flimsy. Translation: The Bulls would have traded Butler if they had received an offer they considered commensurate with a top-12 player but that never happened. One report claimed the Celtics offered the Bulls two first-round draft picks, including a Nets' choice that could be the first overall, but a source refuted that. More telling was Paxson's response to whether the Bulls making the playoffs or not would affect their thought process on Butler.

"It will depend on the direction we choose to go,'' Paxson said. "That's how we deal with things all the time.''

With this up-and-down 28-29 team, nobody really knows what to expect from the final two months but acquiring Payne, center Joffrey Lauvergne and guard Anthony Morrow created more questions than answers about the Bulls' playoff viability. Payne joins a collection of point guards who struggle shooting, Lauvergne cleans the glass worse than a broken squeegee and Morrow arrives reputed as a shooting specialist — except declining numbers suggest he no longer can shoot.

On paper, the Bulls put themselves in better position to qualify for the NBA draft lottery by unloading Doug McDermott and consummate pro Taj Gibson — one of the most underrated athletes in Chicago the past decade.

"When you're trying to develop young players, they have to get on the floor,'' said Paxson in reference to Portis and Valentine.

In a candid 20-minute session, Paxson appeared first, before general manager Gar Forman, and replaced ambiguity with assertiveness. Paxson aggressively defended the organization's mission, declared "I'm not a quitter'' and disputed the perception that he and Forman have grown apart in recent months.

"I think I'm most discouraged by the narrative that's out there,'' Paxson said. "You can debate and argue behind closed doors but the thing we've always done is walk out aligned as an organization. To make the leap from debate to division is wrong. It's a false narrative.''

An unavoidable truth remains that trading McDermott in the middle of his third season further erodes confidence the Bulls can maximize whatever draft picks they might accumulate. McDermott makes three of the last five first-round picks no longer with the team. Those five — Teague, Tony Snell, McDermott, Portis and Valentine — have started 82 combined games for the Bulls, the equivalent of one season for a starter.

Butler and Gibson, both first-rounders, were the last examples of the Bulls successfully drafting and developing players. The latter left town Thursday, and nobody should be shocked if the former is on his way out this summer.