One of the many maddening aspects of the Bulls is how infrequently they take advantage of the opportunities afforded them.Opening a three-game homestand with relatively good health and indisputably good vibes and facing a Nuggets team without Kenneth Faried,... 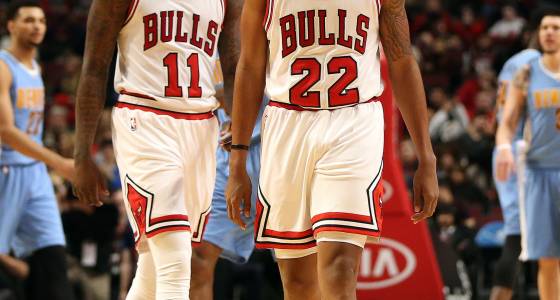 One of the many maddening aspects of the Bulls is how infrequently they take advantage of the opportunities afforded them.

Opening a three-game homestand with relatively good health and indisputably good vibes and facing a Nuggets team without Kenneth Faried, the Bulls treated defense like it's optional and were buried in an avalanche of second-half 3-pointers.

"The shots that we missed deflated us," coach Fred Hoiberg said. "When you miss shots, you have to find a way to buck up and get stops at the other end."

The Bulls led by one with 3 minutes, 8 seconds left in the third quarter but trailed by 21 before the midway point of the fourth. All five Nuggets starters reached double figures and six players overall as the Bulls allowed an opponent season-high for points, topped by Danilo Gallinari's 22.

The Nuggets, who got a triple-double of 19 points, 16 rebounds and 10 assists from rookie Nikola Jokic, connected on 13 of 30 3-pointers.

"We have to run them off the 3-point line," Fajon Rondo said. "We knew what the scouting report was and we didn't do that."

Dwyane Wade and Rondo each scored 19 to lead the Bulls, with Rondo hitting a season-high. Jimmy Butler missed 10 of 13 shots and scored in single digits for just the fourth time this season. Cameron Payne missed his first seven shots before connecting on two late 3-pointers.

"I haven't been in a rhythm in awhile now," Butler said. "It's OK though. I'll find a rhythm. I'll start making some shots."

A month ago, the Bulls were left for dead, the focus of the league after Wade and Butler criticized teammates, Rondo criticized their leadership attempt and fines preceded a team meeting.

Going 6-6 since then isn't exactly the stuff of championship parade routes, especially since it mirrors the Bulls' 30-30 mark. But with 22 games remaining, the Bulls have begun to view that touchstone moment as a positive.

"That needed to happen," Denzel Valentine said. "Guys needed to voice their opinions, get their feelings out, man up. And I think since then, everybody has been bought in and we have been progressing."

Valentine scored seven points with rocky defense as he continues to get opportunities since last week's trade of Doug McDermott. The rookie said he took Wade's comments to heart, an example of how the strong-minded reacted to the criticism, even if the fines weren't rescinded.

"It obviously gave us additional motivation to work hard and prove them wrong," Valentine said of the comments of Wade and Butler. "There are a lot of teams where that kind of adversity happens but you don't know about it because it's behind closed doors. But that stuff happens all the time on teams, even when I was at Michigan State and we were successful."

Big picture in the Eastern Conference, the Knicks' dysfunction quickly replaced the Bulls' blip as the league focus. And injuries seem to hit another team weekly. The Cavaliers, Bucks and now Raptors with Kyle Lowry undergoing wrist surgery all have been hit hard.

"Sometimes those (incidents) are healthy," Hoiberg said of the team meeting. "The hope was to have long-term benefits with getting things off our chest like we did that day. I think it did help us."