SCOTTSDALE, Ariz. — It's only late February and there are still 31 practice games to go, but Chris Rusin is making an early run for a spot in the Rockies' starting rotation.It's not simply that the veteran left-hander has looked good in bullpen sessions... 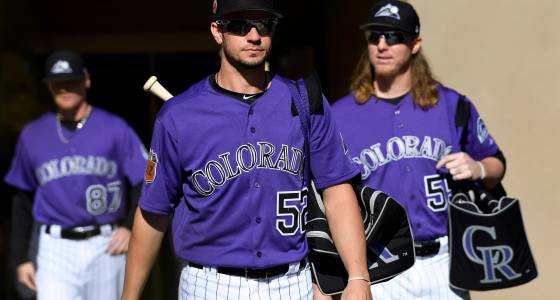 SCOTTSDALE, Ariz. — It's only late February and there are still 31 practice games to go, but Chris Rusin is making an early run for a spot in the Rockies' starting rotation.

It's not simply that the veteran left-hander has looked good in bullpen sessions and looked good throwing two scoreless innings Sunday against Arizona. It's that Bud Black has repeatedly singled out Rusin during spring training. The manager did so again Sunday after six Colorado pitchers limited the Arizona Diamondbacks to four hits in a 6-1 victory.

"Chris pitched well, and he pitched well last year," Black said. "We are thinking about this fella as a starting pitcher. We know that he's versatile enough to go back in the bullpen, if needed, and if that's what's best for our staff. But (Sunday's performance) was a snippet of what he can do."

Sunday, Rusin allowed one hit and struck out one, needing just 23 pitches (15 strikes) to complete his day. He used a low-and-inside sinker to induce a double-play grounder from Dawel Lugo in the second inning.

“I have felt a lot better this spring than I have in the past,” Rusin said. “My body and timing and delivery are a lot better than they usually are this early in spring. I had good location with my fastball on both sides and I’m working on a slider.”

Bettis' plans. Right-hander Chad Bettis won't pitch in a Cactus League game until later this week — at the earliest. He's not hurt. He's just following a schedule that has worked for him the last two springs.

"I'm getting some extra work on the back fields, " he said Bettis, who finished the 2016 season with a flourish, going 7-2 with a 3.75 ERA in his last 14 starts. "I'm working on pitching down and away, and I'm working on perfecting my craft before moving forward."

Holland on hold. Closer candidate Greg Holland, who missed all of 2016 after undergoing Tommy John surgery in October 2015, also is waiting to make his spring debut. The former Kansas City Royals right-hander threw about 20 pitches to hitters Saturday in a simulated game and is scheduled to have a similar outing Tuesday. At that point, the Rockies will further evaluate him.

It's not unusual for Holland to get a relatively late start to spring. He followed a similar plan when he was the Royals' closer in 2014 and 2015.