SCOTTSDALE, Ariz. — There is pitching gold in the Rockies organization.No, not the fool's gold that so quickly faded in the past, but genuine prospects providing quality depth now and for the near future."That's the thing that stood out when we talked... 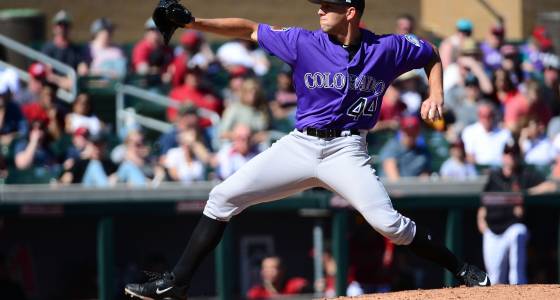 SCOTTSDALE, Ariz. — There is pitching gold in the Rockies organization.

No, not the fool's gold that so quickly faded in the past, but genuine prospects providing quality depth now and for the near future.

"That's the thing that stood out when we talked about our roster through the wintertime," new manager Bud Black said Sunday as he scanned the depth chart hanging on his office wall at Salt River Fields. "I've looked at our 40-man roster and the guys we brought to camp, and I've been really impressed."

Casual Rockies fans are familiar with Jon Gray and Tyler Anderson, young guns who are cemented in the starting rotation and who must come through if the Rockies are going to be immediate playoff contenders.Advertisement But there are other, even younger, prospective starters who could shape the Rockies' destiny, if not in 2017, then certainly in 2018-19.

Right-handers Jeff Hoffman, German Marquez and Antonio Senzatela, along with lefty Kyle Freeland, all have a shot to be big-league starters, perhaps as soon as this season. All four are younger than age 25.

Colorado's 40-man roster features other potential starters in right-handers Yency Almonte, 22, and Zach Jemiloa, 22. There is plus talent among the nonroster invitees, too, in right-hander Ryan Castellani, 20, and lefties Sam Howard and Harrison Musgrave.

Flame-throwing right-handers Jairo Diaz, 25, and Miguel Castro, 22, are attempting to bounce back from injuries, but they could be in the bullpen mix at some point this season.

Right-hander Riley Pint, the fourth overall pick in the 2016 draft who signed for $4.8 million out of St. Thomas Aquinas High School in Overland Park, Kan., will bring a potent repertoire when he arrives in the majors. If all goes well, he could make it there by 2019. Pint's arsenal includes a triple-digit fastball, a power curveball and a plus changeup.

"Our job over the last three years has been to acquire as many young, athletic and talented pitchers as we can," general manager Jeff Bridich said. "If you look at the trades we've made, you will see that it's been with an eye on acquiring young pitching. That's knowing that not all of those are going to work out, but that's no different than any of the other 29 clubs. There is no magic formula, but we are making those efforts."

Bridich believes Colorado is building up the depth necessary to withstand the toil and trouble of pitching at high altitude.

"A lot of our growth has come from within, and there is growth in a lot of the guys who are pushing upward," he said. "Whether it's as starters or relievers, they are making strides. I think some of our most talented, internal pitchers are now at Double-A and Triple-A, and they're waiting to get a taste of the majors. It's that group who, after hopefully a very prosperous development cycle, will add significantly to our depth."

Black, a former major-league pitcher who was hired by the Rockies in large part because of his pitching acumen, envisions a backlog on the mound in 2017.

"All organizations strive for depth, because along the way there are going to be injuries, and maybe performance levels that are less that you expect," Black said. "There is always going to be a little bit of attrition … but the guys who are close (to the majors) have talent and makeup and all of the things you look for.

"And I do know this: When we break camp, we are going to have a nice rotation in (Triple-A) Albuquerque, and that's going to push some of those guys down to Double-A. That's a good thing."