It will all be over for Bryce Alford in a matter of hours.One more final exam Monday and he will have completed his UCLA coursework toward a degree in political science.“I’m very excited about not having school anymore,” Alford said Saturday.He’s... 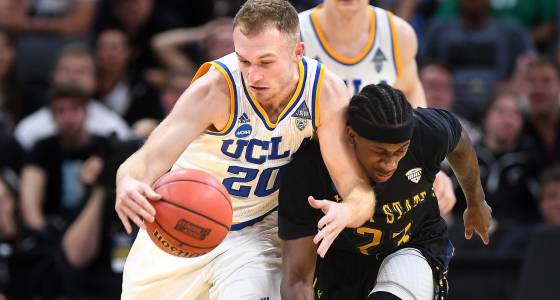 It will all be over for Bryce Alford in a matter of hours.

One more final exam Monday and he will have completed his UCLA coursework toward a degree in political science.

He’s in no such rush to complete his college basketball career. That could go on and on, as far as he’s concerned, preferably involving three stops and five more games.

The senior shooting guard hopes to locate his touch along the way, entering the third-seeded Bruins’ second-round NCAA tournament game against sixth-seeded Cincinnati on Sunday evening at the Golden 1 Center stuck in his worst funk of the season.

The most prolific three-pointer shooter in school history has been unable to put the ball in the basket with regularity over the last four games. He’s made only 10 of 40 shots (25%) and seven of 29 three-point attempts (24.1%) over that stretch, his most prolonged slump since he missed 19 consecutive shots during his sophomore season.

The upside for UCLA (30-4) is that it has won three of those four games and erupted for 97 points in its NCAA tournament opener against Kent State on Friday even with Alford adding only six to the ledger. That can happen on a team that features six players averaging double figures in scoring.

“He knows he doesn’t have the pressure to have to score or make a lot of shots,” Bruins Coach Steve Alford said of his son. “Even by how people guard him opens things up.”

Bryce Alford said his confidence hadn’t slipped, noting he did make two of four three-point shots against the Golden Flashes, and predicted his shot would be there when he needed it. That moment could come soon for a team whose top players have alternated good and bad games during a recent uneven stretch.

Photos from the UCLA Bruins' game against the Kent State Golden Flashes in a first-round game of the NCAA tournament on March 17, 2017.

“To be honest with you, I feel like I haven’t really shot the ball that poorly. It’s been a couple of games now that I haven’t been making the ones that I normally make, but I haven’t had terrible misses,” Bryce Alford said. “As a shooter, it’s one thing if you’re missing and they don’t feel right, but they’ve felt fine.”

Alford has averaged only eight points over his last four games and scored in single digits in each of his last three, the first time that’s happened since the end of his freshman season, when he was coming off the bench. His recent numbers are particularly glaring given Alford’s regular-season averages of 15.6 points per game and 43.6% shooting on three-pointers.

“I’m nervous about that because I’m a big believer in the law of averages,” Cincinnati Coach Mick Cronin said of the only player in UCLA history with at least 1,700 points and 500 assists. “So if a guy is a great shooter and he’s been struggling, it’s going to go the other way.”

The start of Alford’s slump was understandable enough. His shot betrayed him on a teary Senior Night against Washington State on March 4, resulting in a 13-point performance in which he made four of 12 shots and two of eight from three-point range.

But his struggles carried over to the following week. Alford scored eight points on two-for-10 shooting against USC during the Bruins’ opener in the Pac-12 Conference tournament. Things got even worse the next night against Arizona, when Alford scored five points while making two of 12 shots and one of 10 three-point tries.

Alford was largely a nonfactor again versus Kent State, making two of six shots overall. Steve Alford said he was more concerned with the slippage in his son’s cutting away from the ball than his shooting.

“I want him to get to the free-throw line and create more, whether that’s for himself or even more important for teammates because he’s got such good ball skills,” the coach said. “So it’s about getting more aggressive.”

For all its depth and skill, UCLA probably can’t get to where it wants to go without the fifth-leading scorer in school history making a bigger impact. Otherwise the season’s end could come long before the Bruins would like.

“I’ve been here for four years and I can’t imagine it being over, and to be honest with you, I don’t see it being over any time soon,” Bryce Alford said. “There’s just a feel about it, we have confidence that this won’t be my last game.”