Brook Lopez’s struggles doom any chance for a Nets upset

OAKLAND, Calif. — Coach Kenny Atkinson admitted his Nets had lost their way defensively. But against offensive juggernaut Golden State, it wasn’t their defense that cost them, but Brook Lopez’s offense.After getting shredded defensively in Friday’s... 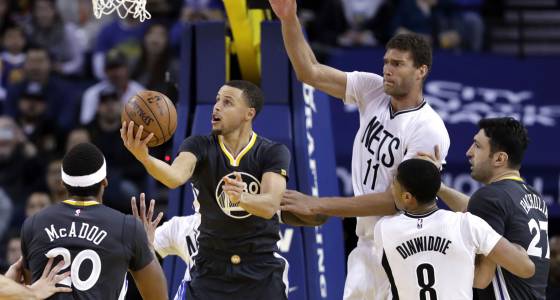 OAKLAND, Calif. — Coach Kenny Atkinson admitted his Nets had lost their way defensively. But against offensive juggernaut Golden State, it wasn’t their defense that cost them, but Brook Lopez’s offense.

After getting shredded defensively in Friday’s 112-95 blowout loss at Denver, the Nets at least were competitive a day later against the NBA’s best team. But a horrid offensive performance from Lopez and a terrible end to the first half cost Brooklyn in a loss to the Warriors at Oracle Arena.

The basement-dwelling Nets fell to 9-49 and ran their losing skid to a league-long 16 straight. Northern California native Jeremy Lin had nine points in 15 minutes in his second game back from his hamstring injury, but they missed Caris LeVert (illness), and Lopez was little help Saturday night.

Lopez, who came in averaging a team-high 20.7 points, finished with just nine. He went scoreless in the first half, 0-for-5 from the floor with four turnovers. And by the time the Nets went into the break, they trailed 62-51 despite playing about as well as could be expected.

“You have certain principles and certain habits you start with at the beginning of the season from training camp. I felt like we lost our North. We lost our concentration, our focus, on what those non-negotiables are. We need to get back to that,” Atkinson said beforehand. “It doesn’t matter how hard [you play] if you’re competing without any discipline or poise or intelligence. We know what our principles are, and we will get back to them.”

They did, but it wasn’t enough. Trailing 39-28 after Shaun Livington’s jumper, they rallied to take a brief 46-45 lead on a Spencer Dinwiddie 3-pointer. They still were down just 52-51 on a layup by Rondae Hollis-Jefferson with two minutes left in the half, when they let Golden State run off the last 10 points.

Trailing by seven, they had the ball with a chance at the final shot. But they botched the possession and Joe Harris’ errant pass got picked off. The Warriors got the last look, and when Dinwiddie came charging to close out Steph Curry, he fouled the Warriors star for what turned into a four-point play with 0.3 seconds left.

The Nets eventually did claw back to within 99-91 after Dinwiddie made two of three free throws with 5:09 left in the game. But Brooklyn came up empty on the next four possessions before Golden State rattled off a 9-0 run to secure the win.
After making just his second career start Friday, LeVert missed Saturday’s loss. Atkinson said, “He’s a little under the weather, nothing too serious. Not feeling well.”

Lin played Friday for the first time since Dec. 26 Friday and played the second half of the back-to-back in Saturday’s homecoming.

Saturday marked the first time in Hollis-Jefferson’s career that he scored 15 points in consecutive games. It also was the double-double of the season.