Less than three weeks after he celebrated the Broncos' third Super Bowl title, general manager John Elway stood in a corridor of Lucas Oil Stadium in Indianapolis last February to drop hints of the coming season and his team's quest for a repeat.Peyton... 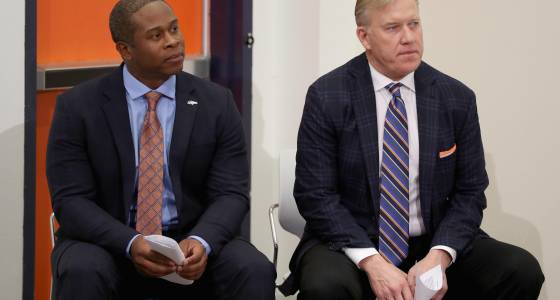 Less than three weeks after he celebrated the Broncos' third Super Bowl title, general manager John Elway stood in a corridor of Lucas Oil Stadium in Indianapolis last February to drop hints of the coming season and his team's quest for a repeat.

Peyton Manning hadn't decided if he would retire. Not yet.

Brock Osweiler hadn't bolted for Houston. Not yet.

Von Miller‘s bumpy negotiations for a record contract hadn't turned sour. Not yet.

And while Malik Jackson and Danny Trevathan had one foot out the door, they hadn't been completely removed from the Broncos' roster.

On paper, the Broncos still had two veteran quarterbacks, one a sure Hall of Famer and the other his groomed heir. They still had a defense with depth and talent to envy, and they still had a plan and good odds to make a deep playoff push.

"We're not in a rush,” Elway calmly reminded everyone last February. “Everything is still fluid."

But the flood of speculation, concern, even panic from outside Broncos headquarters was only beginning to build. The list of questions was growing, and each was significant: Who will be the Broncos' starting quarterback? How will they improve their offensive line? What will they do with DeMarcus Ware?

Twelve months later, the same questions need answers again. And they will undoubtedly dominate Elway's return to Indianapolis this week for the 2017 NFL scouting combine, which starts Tuesday and wraps up March 6.

Elway and Vance Joseph have spent the better part of their 2017 existence in a cave. Denver's “war room?” It's called The Cave, and it's where the GM and his new head coach have pored over hours of tape and leafed through binders of stats and background information on free agents, NFL combine invites and other draft-eligible players.

The Broncos are armed with 10 draft picks — four tradable compensatory picks in addition to their own six — and close to $40 million in salary cap space, since they declined the option on the contract of offensive tackle Russell Okung. They have ammo to make moves and a history of surprising.

Recently, The Cave has been the hub for free-agent analysis, but film of NFL hopefuls has been evaluated and re-evaluated too, with the intent of finding more draft diamonds and maybe a starting left tackle.

Denver's retooled offensive line of 2016 struggled in most facets, as did the offense as a whole.

The defense finished first against the pass for the second consecutive season, but dropped from No. 3 against the run in 2015 to 28th in 2016. Repairing the leak is an emphasis, and the work has already begun, with the signing of Bobby Richardson for depth.

In a draft deep on defensive talent, additional help likely will be sought.

“Last year was a little bit different for us in terms of how teams attacked us,” defensive coordinator Joe Woods said. “So right now we're in the process of going through and looking at what we did last year and the areas that we can improve, and obviously run is one of those areas.”

Another one of those areas is tight end, typically a featured group for the Broncos that has lagged for much of the last two years. Only two teams used fewer multiple-tight end formations than the Broncos last season, a reflection of their limitations and lack of production at the position.

“I think as an entire offense, not just the offensive line, we call can improve — at every position,” McCoy said. “There are some things when you come into an organization that we are going to change. We are going to look at each position and each player.”

There are lists — many, actually — of the names who could fill these roles for the Broncos. Okung joins a free-agent tackle market that has grown in recent weeks, and with money to burn and picks to deal, Elway could select from the pool of veterans in need of a job. Or he could gamble on a rookie; the transition to the pros for an offensive lineman is typically trying, and this year's draft class is lacking in elite tackles.

“It makes it a little bit tougher in the evaluation process sometimes, but again, the onus really falls on us to develop those players," said offensive line coach Jeff Davidson. "Are all of them ready to come in as bona fide offensive linemen? No, but that's what it is with rookie players. I think we all know that going in.”

Denver has been tabbed as a fit for more than a few linemen projected to go in the first round. Garett Bolles, a first-team all-Pac 12 selection out of Utah, is one. Another is Ryan Ramczyk, a tackle who transferred from Division III to Wisconsin, where he played for Paul Chryst, the brother of Broncos tight ends coach Geep Chryst. And there is Cam Robinson, the Alabama tackle who projects well in the power scheme.

Pass rushers star in the Class of 2017, but the list of elite tight ends isn't far behind. Projections swing wildly now, and top-rated tight ends O.J. Howard (Alabama) and David Njoku (Miami) may not still be on the board by the time the Broncos use their first-round pick. But both have been praised for their athleticism, drawing comparisons to Julius Thomas and Jimmy Graham, respectively, and could seemingly contribute immediately.

While the offense is in the greatest need of fixing in Denver, surely it wouldn't surprise anyone if Elway resorted back to picking a defensive player in the first round. Surely, it wouldn't surprise if he traded up for the third consecutive year. And surely, it would not and could not surprise anyone if he defies all expectations by sticking to his simplistic philosophy: Nab the best player and go from there.

That's one hint he won't need to drop in Indianapolis this week.

“We have to do some things offensively and defensively and with the draft,” Elway said. “We have a bunch of draft picks and we'll be involved in free agency. The goal has not changed. The goal is still the same.”

Players invited to the NFL scouting combine who could be of interest to the Broncos:

Garett Bolles, OT, Utah
6-foot-5, 300 pounds
He was the top-rated junior college prospect when he signed with the Utes. Played one year at Utah and earned first-team all-Pac-12 honors. May be best fit for zone scheme.