Brianna Turner leads No. 5 Notre Dame past No. 8 Florida State for ACC title

Brianna Turner scored 24 points to lead No. 5 Notre Dame to its fourth straight ACC regular season title with a 79-61 win over No. 8 Florida State on Sunday in South Bend, Ind.Arike Ogunbowale added 19 points and Kathryn Westbeld had 14 for the Irish (27-3,... 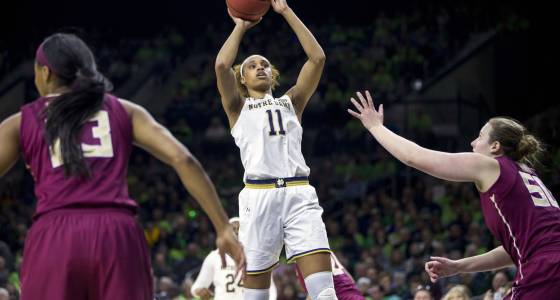 Brianna Turner scored 24 points to lead No. 5 Notre Dame to its fourth straight ACC regular season title with a 79-61 win over No. 8 Florida State on Sunday in South Bend, Ind.

Arike Ogunbowale added 19 points and Kathryn Westbeld had 14 for the Irish (27-3, 15-1 ACC), who will once again be the top seed in the conference tournament, which they have won every year since joining the league in 2013.

Winners of 11 straight overall, the Fighting Irish are the second ACC team to win four consecutive championships, matching Duke's run from 2001-04. After losing their first ACC game of the season on Dec. 29, 70-62 at N.C. State, they rattled off 15 straight league wins to defend their crown.

Notre Dame came out hot, hitting four of five field goals, and had a 10-point lead in the first quarter. Turner hit three straight baskets down low to begin the second quarter, part of an 8-0 Irish run that pushed their lead to 16 points.

Ogunbowale opened the second half with a jumper and a layup and the Irish lead was up to 19 less than two minutes into the third quarter.

A 10-0 Florida State run cut it to 59-50 at the start of the fourth quarter, but Notre Dame's Jackie Young stroked a 3-pointer at the other end to get the Irish advantage back to double digits.

Florida State leading scorer Shakayla Thomas (15 points per game) returned to the starting lineup after missing two games with a shoulder injury. She finished with 10 points.