LITTLE FALLS -- Statistically, Brandon Marshall is among the best receivers to ever play. At the minimum, he's among the top in his era.  Good QB options for the Jets: Boomer says, 'Alex Smith, Tyrod Taylor, Mike Glennon' In 11 seasons, Marshall has... 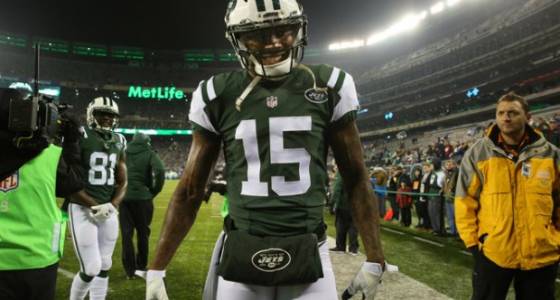 LITTLE FALLS -- Statistically, Brandon Marshall is among the best receivers to ever play. At the minimum, he's among the top in his era.

But for all his accomplishments, he has never played in a playoff game. And if he wants to before he retires, ex-NFL quarterback and current WFAN host Boomer Esiason believes Marshall should leave One Jets Drive.

Even if it means moving to Foxborough.

"I've talked to him about this," Esiason told NJ Advance Media Friday before a charity hockey game at Montclair State University, which raised money for the New Jersey Golf Foundation and Boomer Esiason Foundation. "I told him, 'Look, man, you need to find a place where you can get to the playoffs. You need to feel that.

Marshall's preference is to stay with the Jets. He loves New York, and coach Todd Bowles' willingness to let him him co-host (along with Esiason) Showtime's Inside the NFL. But the math doesn't add up.

The Jets are headed for a full-on rebuild, and Marshall is 32. The Jets need salary cap space, and Marshall's contract has no guaranteed money left. If he's released or traded, the Jets can add $7.5 million with no cap penalty.

A Marshall-Jets divorce doesn't have to be ugly, or a bad thing, according to Esiason.

"It would make more sense for him than the Jets," Esiason said. "It's time for him to go find a spot where he can taste the playoffs ... Right now, as we sit at this point in time, the Jets are one of five teams about as far away from the playoffs as the Knicks are."

How much cap space do Jets have?

There were even issues with the Jets. He clashed with teammate Sheldon Richardson, which left a "dark cloud" over the Jets in 2016, per Darrelle Revis. Quincy Enunwa said it's sometimes hard to separate Marshall's message from his delivery.

"Brandon is a really passionate guy, and he's frustrated because he hasn't been to the playoffs," Esiason said. "I know he's a very opinionated guy. I know this because I work with him [on Inside the NFL]. He's not nearly as passionate there as he is on Sundays, I'm sure.

"When they're getting embarrassed at halftime of a New England game or a Kansas City game, he's not afraid to voice his opinion."

If the Jets do keep Marshall, Esiason says they'll have to add a quarterback able to handle Marshall's "alpha personality." Right now, that player isn't on the roster.

"If Brandon is here, and your quarterback is either Bryce Petty, Christian Hackenberg or Mike Glennon?" Esiason said, "I think you're asking a lot of that quarterback to deal with that personality at receiver. He needs a strong presence at quarterback."

Esiason's foundation hits close to home. His son, Gunnar, has cystic fibrosis. But he now lives a productive life, coaching high school football and hockey on Long Island, after being diagnosed at age 2, in 1993.

"One of the things our foundation really promotes for CF families is activity. Don't sit at home. Don't sit on your hands. Get out and run, skate, bike. Do something that you love to do physically, whatever it may be.

"But just go out and participate and clean those lungs out as best you can. It's been an unbelievable 20 or so years that we've done this. We've raised over $130 million. We've given $4 million away in scholarships to CF patients all across the country."