DUNEDIN, FLA.—When it comes to baseball, Toronto Blue Jays players are all on the same side — that is until you bring up walk-up songs. Some prefer the twang of a country tune. For others, it’s the beat in a rap that gets the blood pumping.At... 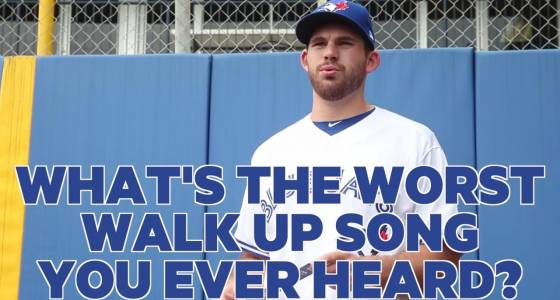 DUNEDIN, FLA.—When it comes to baseball, Toronto Blue Jays players are all on the same side — that is until you bring up walk-up songs.

Some prefer the twang of a country tune. For others, it’s the beat in a rap that gets the blood pumping.

At a recent photo day here, Blue Jays players had the chance to sound off on the worst jams they have heard accompany their teammates and opponents to the plate or the mound.

“There’s some pretty bad ones out there,” pitcher Aaron Loup said.

And their answers were about as varied as they come.

Some, like pitcher J.A. Happ, were reluctant to throw any of their teammates under the bus.

Others, like pitcher Marcus Stroman and infielder Ryan Goins, were more than happy to take shots at their teammates’ taste — and it sounds like it wasn’t the first time Justin Smoak and Kevin Pillar have been under fire.

Catcher Jarrod Saltalamacchia knows how it feels to have a bad tune picked for him. He wasn’t alone.

“My teammates one time put the Barney song as my walk up without telling me and I was not happy about it, to say the least,” infielder Darwin Barney said.

There was one thing most players did seem to agree on, though.