Blackhawks on a roll -- even Rozsival

During one of his only media scrums all season, I asked Michal Rozsival how he felt about scoring for the first time in over a year during the Blackhawks' 6-3 victory over Arizona on Thursday.The beaming Hawks defenseman looked down at the piece of paper... 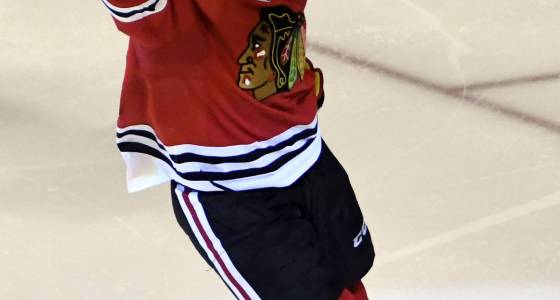 During one of his only media scrums all season, I asked Michal Rozsival how he felt about scoring for the first time in over a year during the Blackhawks' 6-3 victory over Arizona on Thursday.

The beaming Hawks defenseman looked down at the piece of paper he was holding and said: "My first thought? I imagined this scoresheet and there was no zero anymore in my goal column. SWEET!"

Rozsival was in the lineup for the first time since Jan. 15 because the Hawks decided to use seven D-men with Niklas Hjalmarsson a bit banged up. Hjalmarsson aggravated his injury in the first period and did not return. The Hawks were off Friday, so an update on Hjalmarsson won't be known until Saturday's practice.

As for Rozsival, he admitted it wasn't easy returning to game action after missing so much time. Arizona's first 2 goals came with Rozsival on the ice, but he certainly made up for it by roofing a shot over Mike Smith's left shoulder 2:56 into the second period to give the Hawks a 4-3 lead.

It was the veteran's fourth goal in 200 games with the Hawks, with the last 2 coming against the franchise he played with from 2010-12.

"I was joking with some of the players that my last goal I scored was in Arizona against Phoenix, and it happened again against the team that I used to play for," Rozsival said. "Sometimes that happens."

Seeing Rozsival score was certainly a surprise, but the Hawks are playing so well that just about anyone can find his name on the scoresheet. Coach Joel Quenneville's squad has amassed 40 goals in the last nine games -- a whopping 4.44 per contest. Before this hot streak, the Hawks averaged 2.71 goals per game.

"We're getting scoring from across the board," Quenneville said. "There (were) stretches this year where one line was doing most of our production, and (now it) seems like the balance is great.

"(I) still think a lot of our offense is coming with our D getting involved, be it off the rush or in zone, and creating some possession time or different looks, which loosens up coverage on the puck."

This is absolutely true.

Anyone who has watched the Hawks this season knows the defensemen mostly hung back at the blue line when the forwards had the puck in the offensive zone. Lately, though, Brian Campbell, Trevor van Riemsdyk and Duncan Keith have made it a point to push the action and get involved in plays.

It's led to far better scoring opportunities and it's showing on the scoreboard -- and in the standings as the Hawks are just 3 points behind first-place Minnesota in the Central Division.

"We're playing a faster game than what we were earlier in the season," Campbell said. "And obviously guys are picking up their game -- from young guys to veteran guys -- we've kind of pushed the pace up."