A season ago, the Blackhawks made a trade for Richard Panik, who had fallen out of favor with the Maple Leafs.It was a minor move that ended up working out well for the Hawks and Panik, who has been a good fit in Chicago. The Hawks decided to try that approach... 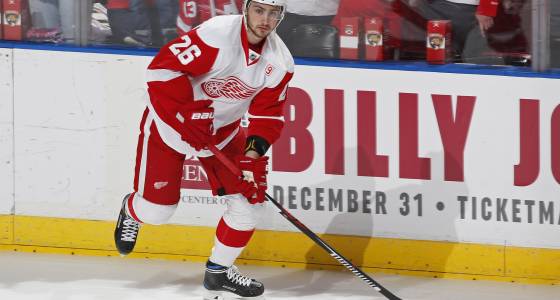 A season ago, the Blackhawks made a trade for Richard Panik, who had fallen out of favor with the Maple Leafs.

It was a minor move that ended up working out well for the Hawks and Panik, who has been a good fit in Chicago.

The Hawks decided to try that approach again Friday when they acquired 24-year-old winger Tomas Jurco from the Red Wings in exchange for a third-round pick in this year's draft. And according to general manager Stan Bowman, this may be the only trade the Hawks make before the Wednesday deadline.

"I'm not expecting more trades," Bowman said. "I can't predict if more will happen but I have a good feeling about this group right now."

The Hawks have helped convince Bowman of that with their recent play. They have won eight of their last nine games and have looked good doing it, dominating teams in puck possession and scoring chances more frequently than they were earlier in the season. Trading for Jurco adds some depth for the Hawks at a relatively low price.

Jurco has scored 15 goals in 159 NHL games but played in just 16 this season with no points as he has had trouble cracking the Red Wings rotation. To make room for Jurco on the roster, the Hawks re-assigned Vinnie Hinostroza to Rockford.

Jurco has been a healthy scratch often, but that didn't deter Bowman from making the deal. Bowman said the Hawks have been tracking Jurco for "quite a while."

"Tomas comes to us with a good offensive imagination, a very creative player," Bowman said. "He has good skills and good speed. … We've seen it with other players before and even players in our system, sometimes they just don't work out for whatever reason and they need a different opportunity."

Bowman said in January, before the Hawks embarked on their hot streak, he had not planned on making any major moves at the deadline and said he intends to hold true to that statement over the next few days.

Bowman said he looks at this team and doesn't see glaring needs like there were in seasons past when he made big moves such as acquiring center Antoine Vermette and defenseman Kimmo Timonen in 2015 or winger Andrew Ladd last season.

"Previous years I felt we definitely needed something and were lacking in an area," Bowman said. "I've had this feeling about our team, not just recently when we've obviously played very well, but even going back a month ago. I liked the way this group was starting to come together. I think we've seen that be enhanced over the last couple of weeks."

Bowman hopes Jurco can enhance their team even more.

Jurco will not require much salary-cap space to bring aboard. His annual cap hit is $900,000, according to capfriendly.com. Jurco will be a restricted free agent after the season. The plan is to have Jurco, who was on his extended break with the Red Wings, join the Hawks in Chicago for practice Saturday morning. But Bowman stressed the Hawks weren't expecting Jurco to make a big impact immediately.

"It's going to take some time," Bowman said "We're going to be patient with him but we really think there's a good fit, looking at his skills and the style of hockey we play. I think a fresh start will be great for Tomas."