As spring ball kicks off in Big 12 country this week, plenty of questions abound in the league. Many won't be answered until the the fall. But some could become clear this spring.Below are 10 burning Big 12 questions to follow this spring:Who will become... 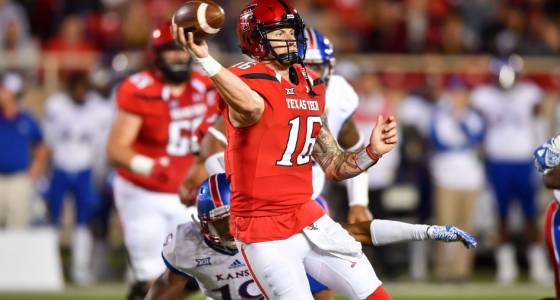 As spring ball kicks off in Big 12 country this week, plenty of questions abound in the league. Many won't be answered until the the fall. But some could become clear this spring.

Below are 10 burning Big 12 questions to follow this spring:

The Sooners lost a boatload of production out of their backfield when Samaje Perine (the school's all-time leading rusher) and Joe Mixon (No. 2 nationally in all-purpose yardage in 2016) bolted for the NFL draft. Finding their replacements will be paramount for a program with eyes toward getting back to the CFP. Incumbents Rodney Anderson and Adbul Adams will look to fend off newcomers Trey Sermon and Marcelias Sutton going into the summer.

Who will take the lead in Baylor's QB battle?

Zach Smith seemed to be the only option at quarterback for first-year coach Matt Rhule. Then, Anu Solomon arrived from Arizona as a grad transfer, giving Baylor one of the only true quarterback battles in the Big 12 this spring. Smith is coming off a sparkling bowl performance, in which he threw for 375 yards and three touchdowns in a rout of Boise State. But Solomon has a wealth of experience, including almost 7,000 passing yards and 49 touchdowns.

Is Nic Shimonek ready to take the reins in Lubbock?

Patrick Mahomes has been a constant for Texas Tech the last two-and-a-half years as one of the most electric quarterbacks in the country. With Mahomes declaring for the draft, the Red Raiders will turn first to Shimonek, who transferred from Iowa in 2014. In his only meaningful action last season, Shimonek tossed four touchdowns in one half. That, however, came against Kansas. Can Shimonek wheel and deal against the rest of the league? This spring will provide a glimpse.

Who will take over at left tackle for Oklahoma State?

With Mason Rudolph, James Washington and Justice Hill all back, the Cowboys will boast one of the best offensive triplet combos in the country. On top of that, Oklahoma State returns several experienced receivers and the bulk of the offensive line. But the Pokes have one glaring hole at left tackle, without an obvious successor to outgoing two-year starter Victor Salako. Shane Richards, Dylan Galloway and incoming juco transfer Arlington Hambright will all vie to fill the one vacancy on an otherwise loaded offense.

Last month, Kansas State's hall of fame coach announced he had been diagnosed with throat cancer and had been undergoing treatments. Snyder has maintained that those treatments won't affect his coaching duties next season or this spring. But he is also battling a serious illness. The Wildcats are obviously better when Snyder is able to give the team his full attention. Hopefully, the cancer won't prevent him from doing that this spring.

In Week 1 of last season, Buechele looked like Texas' quarterback of the future, as he torched Notre Dame for 280 yards and two touchdowns in his first career start. However, Buechele faded down the stretch, along with the Longhorns, as Texas failed to reach a bowl. With a new coaching regime now in Austin, Buechele will have to prove himself again. And he'll have to do so competing against Ehlinger, an early enrollee, an Austin native and one of the top quarterback recruits in the country.

How sharp will Will Grier look?

It's been a season-and-a-half since Grier took a snap in a game. Which is why this spring at West Virginia, he'll have plenty of rust to knock off. Grier was sensational in his first six games as a freshman at Florida, but that was before a positive PED test. A season-ending suspension. A transfer to West Virginia. And another season of sitting out. Grier is obviously talented. But finding his Florida form could take time.

How will Doug Meacham impact the Jayhawks?

David Beaty has had a tremendous offseason, which included plucking Meacham from TCU to run his offense. Meacham's arrival will give Beaty more freedom to be Kansas' head coach, while giving the Jayhawks an experienced and proven playcaller. That should give the Jayhawks a major boost, beginning this spring.

Where will Joel Lanning fit in?

After two years of being a situational/starting quarterback for the Cyclones, Iowa State has plans of experimenting with Lanning this spring, now that Jacob Park has won the starting job for good. This week, Lanning worked out at linebacker, one possible destination. Lanning is tough, experienced and one of the best athletes the Cyclones have. Finding a more substantial role for him will be one of Iowa State's biggest goals this spring.

Robinson was one of the most highly touted high school quarterbacks in the country. The Horned Frogs would prefer to give him a redshirt year to develop while Hill finishes out the final season of his college career. But given Hill's up-and-down play last season, Robinson could force the Horned Frogs to rethink that plan by putting together a head-turning spring.