In this week's Big 12 mailbag, we delve into the quarterback situations at TCU, Texas and West Virginia, and examine the 2017 prospects of the Horned Frogs, Mountaineers and K-State.Spring ball, up next.On to the 'bag:@Jake_Trotter Based on bowl season... 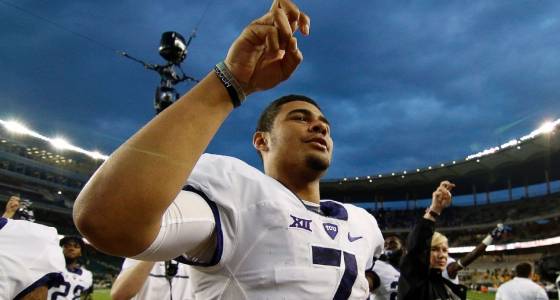 In this week's Big 12 mailbag, we delve into the quarterback situations at TCU, Texas and West Virginia, and examine the 2017 prospects of the Horned Frogs, Mountaineers and K-State.

Spring ball, up next.

@Jake_Trotter Based on bowl season results, does Big 12 have a good chance to do damage in OOC?

Trotter: A chance, yes. But it's going to require a couple of upsets. Oklahoma will be an underdog at Ohio State. Texas will be a massive underdog at USC. I'm not sure TCU, West Virginia or Texas Tech will be favored against Arkansas, Virginia Tech or Arizona State, respectively, either. So the Big 12 is going to have to win a couple games it shouldn't in order to build off of the momentum from last bowl season, when, ahem, the Big 12 won games it wasn't supposed to.

@Jake_Trotter who will be the new comer of the year?

Trotter: West Virginia quarterback Will Grier is the favorite right now. But whoever wins Oklahoma's starting running back job (Trey Sermon? Rodney Anderson? Marcelias Sutton?) will have a chance. So, too, will Arizona transfer Anu Solomon, if he wins the Baylor quarterback job. Kansas State's Carlos Strickland, Oklahoma State's Tyron Johnson and Oklahoma's Marquise Brown could all be impact transfer receivers, but I don't know if they'll have the overall numbers to be contenders.

@Jake_Trotter West Virginia's season prediction record? Why no love for us?

Trotter: West Virginia has a lot to replace on defense, on the offensive line and at receiver. On top of that, the Mountaineers have somewhat of an unknown in Grier, who though talented, hasn't played for a season-and-a-half. Yet with all that being said, I think the Mountaineers could still be a top 25-caliber team again. As for predicting the record, East Carolina, Delaware State, at Kansas, Texas Tech and Iowa State should be wins. At Oklahoma should be a loss. Which leaves Virginia Tech (in Landover, Maryland), at TCU, at Baylor, Oklahoma State, at Kansas State and Texas as winnable, but also losable games. If the Mountaineers could win, say, four games from that last category, they could be 9-3, which would constitute another terrific season.

Trotter: I think Shane Buechele will be the starter in Week 1. But it would not surprise me if Sam Ehlinger played in the opener. Nor would I be shocked if he were Texas' starting quarterback by the Oklahoma game.

@Jake_Trotter are we underestimating TCU football in '17 ?

Trotter: We might be. The previous two weeks, we ranked all the position groups in the Big 12, and TCU came out with the highest average ranking, which surprised even us. But when you think about it, TCU really has no glaring weaknesses on paper, with a terrific running back in Kyle Hicks, a boatload of capable receivers and the league's best linebacking duo. It's going to come down to quarterback Kenny Hill. If he limits mistakes and shows more consistency, TCU could be a Big 12 title darkhorse.

Trotter: I think TCU would like to roll with Hill in his final season and give Shawn Robinson a year to develop, possibly even redshirt him. Robinson has tremendous tools, athleticism and potential, but he's a little raw and could really use a season of fine-tuning his mechanics under offensive coordinator and position coach Sonny Cumbie.

@Jake_Trotter Who are your top 2 teams in the BigXll next year? I've heard mention of KSU factoring in nationally. Concur?

Trotter: The Oklahoma schools are the clear top two, most notably because they boast the two most accomplished quarterbacks -- Baker Mayfield and Mason Rudolph. But there will be a third team that challenges. Last season, that team was West Virginia. This season, there's no reason it couldn't be K-State. The Wildcats have a favorable schedule. A veteran quarterback (Jesse Ertz) and several stalwarts on defense.

@Jake_Trotter as a child, what did you want to do when you grew up?